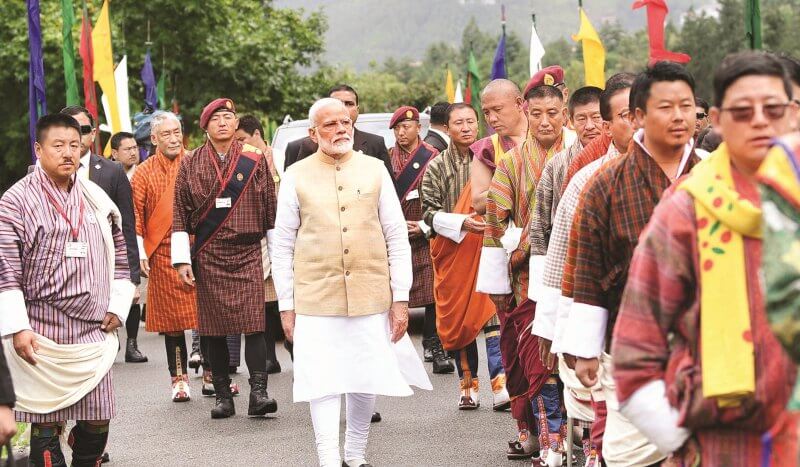 (Shubha Singh is a foreign policy and strategic affairs commentator. The views expressed are personal. She can be reached at [email protected])

Prime Minister Narendra Modi’s two-day visit to Bhutan was aimed at re-engaging with the Himalayan neighbour during his second term in office as part of his ‘neighbourhood first policy’. The visit added significance since Bhutan has been changing under its new government and India-Bhutan ties have to be reoriented to the new winds blowing in Bhutan.

In 2014, Thimphu was the first foreign capital Prime Minister Modi visited shortly after the NDA government had been formed. It was an indicator of the special relationship shared between India and Bhutan. After the 2019 general election, his first foreign destination was Maldives to attend the inauguration of the new government in Male headed by President Ibrahim Mohamed Solih. On his way back to Delhi from Maldives, Prime Minister Modi stopped over at Colombo at the request of the Sri Lankan government.

Modi’s visit to Bhutan has signaled a deepening of the bilateral ties and converting them into a more broad-based relationship. Both sides are making efforts to diversify and develop their ties to a wider variety of sectors that go much beyond the traditional cooperation in the hydropower sector.

The visit took place at a time when there is greater international attention on Bhutan, just after the visit of senior United States official John Sullivan and a visit by the Chinese ambassador to India, Luo Zhaohui earlier in the year. Deputy Secretary of State John J. Sullivan was on a visit to Thimphu last week, followed by a two-day trip to Delhi. It was the first visit to Bhutan by a senior US official in the past two decades as US Secretary of State Mike Pompeo tweeted. During his discussions in Thimphu, Secretary Sullivan emphasized the ‘importance of expanding

people-to-people ties between the US and Bhutan and enhancing joint efforts to combat human trafficking’.

Though Bhutan does not have diplomatic relations with the US or China as part of its longstanding policy, both the US and China have increased their informal contacts and interaction with the Bhutanese government in recent times. China has made efforts to reach out to Bhutan to establish formal diplomatic relations; Chinese Vice Foreign Minister Kong

Xuanyou visited Thimphu in July 2018, the first high-level visit from China after the Doklam impasse in 2017 when Chinese People’s Liberation Army (PLA) and Indian army soldiers had a 72-day face-off in the trijunction region between China, Bhutan and India.

China has made major inroads into South Asia with large infrastructure projects in the past decade, from Sri Lanka, Maldives, Bangladesh, Pakistan and Myanmar. Beijing was keen to include Bhutan in its Belt and Road Initiative (BRI). Though Thimphu declined the invitation to attend the BRI summit in April, China has attracted interest among Bhutanese youth who favour increasing Bhutan’s interaction with China.

As Bhutan has made its transition to democratic governance, it has modernized and opened out at its own pace. With three changes in government through three elections, there is greater political awareness and debate over policy issues in the country. Bhutan Prime Minister Lotay Tshering’s government aims to diversify the economy and reduce dependency on hydropower export. There is a growing view, especially articulated by the younger generation that believes Bhutan should increase its engagement with a wider range of countries, including China.

Hydropower exports to India provide more than 40 per cent of Bhutan’s domestic revenue. India is Bhutan’s main development partner and Bhutan’s hydropower export form the bedrock of the development cooperation. The Indian government has made plans to expand its partnership from its heavy dependence on the hydropower sector to other areas and assist Bhutan in increasing trade in a wide range of products. Bhutan’s Prime Minister Lotay Tshering and Modi jointly inaugurated the 700-MW Mangdechhu hydropower project in the Trongsa Dzongkhag district in central Bhutan. They also inaugurated the Ground Earth Station and SATCOM network linked to ISRO’s South Asia Satellite that would facilitate communication, public broadcasting and disaster management in Bhutan. Scientists from Bhutan are to travel to India where ISRO would help them design and launch a small Bhutanese satellite.

India used to be the top destination for young Bhutanese to study abroad, but in the recent years, Bhutanese students are choosing to go to western countries, resulting in a significant reduction of Bhutanese students studying in India. India and Bhutan are in the process of establishing linkages between top Indian institutions and colleges in Bhutan. Modi said to the students at the Royal University of Bhutan: “People energize our ties.” Prime Minister Modi reiterated India’s support to Bhutan’s current Five Year Plan as he outlined a new programme of cooperation with Bhutan that included space, education, Information Technology, healthcare and science and technology that is line with Bhutan’s new priorities and aspirations. (IANS)