'Helicopter Eela' Review: Kajol is Charming In Spite of The Movie's Short Comings

Bollywood movie Eela is about an obsessive mom; who cannot let go of her son Vivaan (Riddhi Sen) to the extent that the mother-son relationship is damaged. Eela is a story of a 'helicopter' mom who crosses every possible lines and boundary to make life uncomfortable for her grown-up son. But what drives her to this madness? Why does she have an exceptional habitual disorder of checking on her son every minute? Well, the answer to this obsessiveness lies in her past.

After marriage, Eela's husband Arun (Tota Roy Chowdhury) leaves her under strange circumstances that defy logic and reason. She has abandonment issues which she channels on her son. This one line mother-son 'tu tu main main' banter makes up for the entire duration of a film that drags on endlessly through a medley of sketchy songs and outdated scenes. 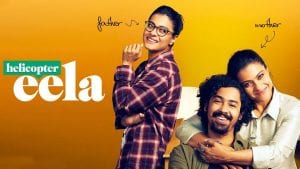 There's no denying the effervescence of Kajol. Every time she comes on screen she brings out a different element of her character. Her 'care a damn' attitude and utmost disregard for the technical aspect of her job has made Kajol one of the most diverse and versatile actors of her generation. As Eela, she dives into the role of this emotional mother who is constantly worried about her son's well-being. Everything from her comic timing to her dramatic scenes is on point. Kajol goes beyond the wafer-thin plot and the caricature cast and brings her own energy into the film. Some of the best scenes in Eela are the ones where she is in the middle a long monologue or being her goofy self. For those who grew up on the Indipop culture of the '90s will have a real treat in the first half. Eela's love for music takes her to a party which has cameos from '90s pop stars like Baba Sehgal, Shaan, Ila Arun, Anu Malik. Watching these guys in the same frame is sure to bring out the nostalgia.

Eela is too long and tiring. Director Pradeep Sarkar, despite using youngsters and setting the story against a college campus, fails to resonate the sentiment of the youth. It feels like a bad '90s TV show that is endlessly dragging on for multiple episodes. Also, the plot twists and turns have no logic. Why does Arun have a change of heart and come back after abandoning Eela for so many years? Kajol's banter with her son also gets monotonous and weary with the same repetitive conversations. The climax too falls flat in a very long song and dance routine that has you testing your patience. Neha Dhupia's cameo doesn't add any value to the film.

If you are Kajol fanatic, go for the movie!