Guwahati: The Home Department of the Assam Government on Monday at the ongoing Legislative Assembly session stated to a question raised by Congress legislator Abdul Khalek that around 29,829 detected foreigners have been pushed back to their native country since 1985 to January 2019. 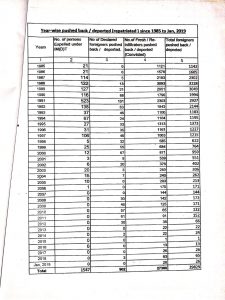