Guwahati: A huge amount of explosives recovered from three abandoned bags by Government Railway Police (GRP) at platform no 3 of Guwahati Railway Station on Monday morning at around 5.40 am.

Speaking to The Sentinel Digital, ASI Guwahati GRP, Mahesh Baishya said, “During our investigation, we found 22 packets of Gelatine carrying 440 gelatine sticks, 700 pieces of detonators in 7 packets, fuse wire 120 metre from the spot. No persons apprehended so far in connection to the matter.” 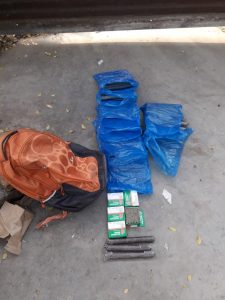 It may be mentioned that these explosives were recovered by a train checking party of the Government Railway Police from three abandoned bags when UP bound Avadh-Assam train was on the platform. 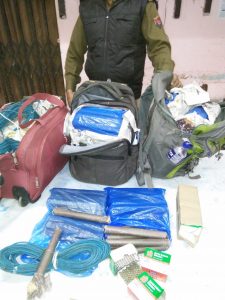 Furthermore, Jagi Road Government Railway Police (GRP) Krishna Haloi informed The Sentinel Digital that around 160 pieces of Gelatine and 5 packets of detonators carrying 500 pieces at around 7.20 am from the toilet of AC 2 tier coach of the same Up Avadh-Assam Express today.