Bhogali Rongali and our Identity

Earlier young people were involved in making Bhela Ghar with the help of elders during this festival. The preparations started much before the day, they went to the post harvesting paddy fields for straw to make the bhela ghar; sometimes it took almost a week to collect them and was completed by the morning of Uruka. Now these scenarios are changing ,younger generations hardly involved in making this Bhela Ghar ,somebody even give contract to daily wage labours to complete it by Uruka even in villages! The community feast, burning Meji, etc. And other rituals are also gradually missing from the scene as almost everybody is celebrating it individually. 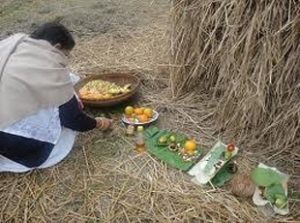 I have found a very interesting fact about celebrating Bhogali Bihu here in Guwahati; nobody cares to prepare Pitha (Rice cake) and other delicacies in Magh Bihu or Bhogali Bihu. All are dependent on readymade Pitha, Chira (parched rice) etc available in the market. It is not a very hard task to make pitha; rice used for making pitha available everywhere, if someone follows it properly can make it. Otherwise our next generation will never know how it is prepared and they will think it is found only in stalls. But my wife is keeping my Ma’s legacy still alive by preparing Pitha every year. Earlier women used to weave gamosas in the Tatsaal (Hand loom) which has now vanished from the villages also. Now people of Assam are dependent on machine made gamosas imported from other States! Thus creating threat to our own culture, and creating threat to this indigenous handloom industry. Even the Paat, Muga industry has not been spared from this kind of threat as some dishonest businessman use to sell duplicate silk material in the name of our own Paat and Muga.

We should be very careful about preserving our own culture and tradition. Now we are adopting other’s culture which is not a bad thing. But first we should know and preserve our own culture properly. We are celebrating some imported festival like Dhantersas, Christmas, etc.; we are lighting candle on Christmas but we forget to light an earthen lamp on Kati Bihu! Whether we are aware of Borgeet or not does not matter but celebrating Bordin (Christmas) is a must for our status symbol. We have a very little knowledge about our colourful festivals and culture of all ethnic people of Assam like Bodo, Rabha, and Karbi, etc. 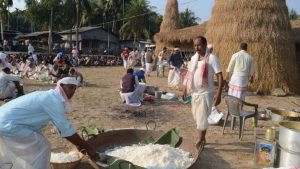 There is another dangerous thing that is happening nowadays in our State, which may cause misinterpretation of our culture and tradition to other parts of our country. The TRP-hungry local news channels are circulating some news items regarding Bhogali Bihu celebration. They are showing people dancing Bihu during Magh Bihu, but as our old tradition is concerned Bihu dance perform during Rongali Bihu only. Even common people are encouraging these wrong steps only to appear on Television for cheap publicity. Every festival has their own identity and tradition, people should not destroy it. Even Rongali Bihu celebration has some specific time span; it is celebrated only for seven days. But people are celebrating it for not less than two to three months now. These news channels are telecasting Bihu functions relentlessly for months, thus encouraging people to give up our old tradition and culture. If someone from other place will watch these programme on TV then he or she will have a wrong concept about our Bihu, so whom we should blame for it?

Another interesting thing is happening as there is an unannounced competition is going on making Bhela Ghar during Bhogali Bihu. Thanks to these news channels for this! Everyone is trying to make Bhela Ghar in a different ways, replicating some ancient monuments or other important issues. But it is not a Puja mandap; it has its own identity and tradition! Nobody should go against it otherwise the days are not far away when some big company will come forward to sponsor these Bhela Ghars!

Our culture, tradition and identity are at risk from the illegal migrants from other countries. Now after implementing the Citizenship Amendment Bill we may become an extinct community someday like the Red Indians! Now it is our responsibility to give safeguard to our own identity. Protest is not the only solution; everybody should be responsible keeping our identity intact. Though the clause six of Assam Accord is there to safeguard us but doubt is there whether it will be implemented someday or will remain in black and white only. So we can conclude citing example from our heartthrob Dr Bhupen Hazarika’s song “Ami Asomiya nohou dukhia buli shantana lobhile nohobo, ajir Asomiyai nijok nisinile Asom rosatole jabo”