Over the last few years, the food and beverages industry of Guwahati has developed at a tremendous pace. With the onset of internet-based technologies, globalisation, increase in purchasing power and rise of the middle class, dining out has become more common among the people of the Northeast. The middleclass, nowadays, are seen to be more eager to let their tastebuds savour new varieties of global cuisines as well as different variants of conventionally popular food items. And of course, with Guwahati getting transformed into the gateway of Northeast India as well as Southeast Asia, it has become a melting point for people from various sections of society and from different walks of life who are eager to experiment with new cuisines. 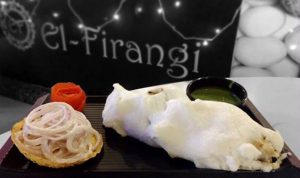 To cater to this increasing demand of the people, a number of casual and fine dining restaurants have come up in the city. One restaurant which deserves our attention here is none other than 'El-Firangi', which is located in GNB Road, Ambari opposite the Guwahati Press Club. A blend of an upscale fine dining restaurant and a casual bistro-café, El Firangi throws a bunch of pleasant surprises to its visitors. Within a very short span of time, this highly cosy restaurant has stirred quite a few eyebrows due to is penchant for serving Mediterranean – especially Lebanese and Iranian cuisine, traditional Indian dishes, Asian – in the form of Thai and authentic Chinese fare – as well as traditional Mughlai cuisine in a very hygienic, cosy and elegant-yet-affordable environment!

The first thing that strikes one would be the name of the restaurant. The management explains, "We wanted a unique and trendy name for our restaurant. Given the food that we serve – which is basically a blend of Mediterranean, Indian, Thai, Chinese and Mughlai food – a global cuisine per say; we thought it would be pertinent to name it as 'Firangi', which roughly translates as 'For Foreigners'. Thus, the name 'El Firangi' came into being.

A totally home-grown restaurant, the restaurant is spread over a spacious carpet area of 1500 square feet right on the road. The space is manned by a bevy of 17-18 trained personnel, including four chefs trained in the subtler nuances of Lebanese, Iranian, Thai, Chinese and Mughlai food. A separate array of continental and fusion food delicacies are also available in the restaurant. 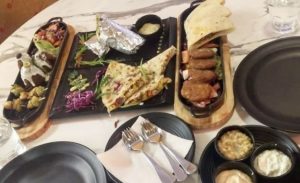 At present, there is a seating capacity of 70-75 souls at one point of time. The seating area broadly consists of a bistro or cafeteria area, a family dining space and a private dining space which can roughly seat 15-20 people. The private dining space can also be booked in advance. The interiors of the restaurant are bright and cosy. While the colours of the walls and rugs along with the exotic artefacts gives a middle eastern ambience, the plush sofas, tasteful cutlery and chic presentation gives a classy contemporary look. It would not be wrong to term the overall ambience as a very "global" one.

Just a few months old, the place has met with a very enthusiastic response. The management of the restaurant said that it has met a highly favourable response from all sections of people – be it youngsters, professionals and families alike. "Those who have a palate for eclectic global tastes often find themselves at home in our restaurant. Our large dining space is suitable for families who make the best use of it while our private seating area is popular amongst large groups of people. The bistro is also popular for casual get-togethers," the management said. The restaurant also has a small mocktail counter, called Native Roots, in front of the restaurant, which serves an exciting array of ice creams and milkshake blends.

Talking about the dishes, the management said that they have a wide array of food for people with different tastes and preferences. "If someone has a taste for global cuisine and global culinary aspects, he or she can try Iranian platters, Lebanese Falafals, and other assorted cuisines. We also have some signature dishes like Lebanese Kabsa (biryani), some fusion food and others which are served in their most authentic and traditional manners," said the management, adding that 90% of their customer base comprise of "repeaters" i.e. people who had earlier visited the restaurant and liked the food. The signature dishes would undoubtedly be the Lebanese and Iranian platters, and of course, the Mughlai cuisine. Both vegetarian and non-vegetarian items are served in the restaurant. For those having a penchant for Arabian flavours, they will find the entire gamut here – sumach spipces, the seven Lebanese spices, Baba Ghanoush, Tahini sace, Shawarma, Hummus, Pita bread, and the like. The Shawarma is served in a different style in El Firangi as they are wrapped inside the Pita bread, which is baked in the restaurant itself.

The management and chefs keep a regular track of the feedback of customers to upgrade and improvise their menus. As the manager said, "We try to give ourselves a miserly rating of 9 out of 10. As we are new, there are bound to be shortcomings and in the event of such shortcomings, we first try to rectify ourselves by upgrading ourselves and also serving complimentary dishes to the customer."

The restaurant also has a huge fan following on social media. One of the restaurant's regular customers, James Sonam, said, "This is a fantastic hub for food lovers and the place sure is funky good and happening. The Lebanese food with pita and the biryani are worth every dime!"

Another customer Manikankana Bhattacharya said, "Situated in the heart of the city, this restaurant provides for beautiful Mediterranean, Indian and Chinese cuisine. I had ordered Lebanese special chicken Shawarma for starters. The plate consisted of moist Pita bread stuffed with overwhelming chicken filling and was accompanied by my all time favorite fries and three different dips! For mains, I ordered Chicken mezze platter and Labenese Style Chicken Biryani. In case of the platter what caught my attention was the buttered Rice topped with Sunny side up and it was undoubtedly the winner for me. It was served with different kinds of kebabs and stir fried veggies. The biranyi contained beautiful whole spices and was served with a curry. It was really an enjoyable meal and enjoyable experience. I loved the place!