In Search of the Perfect Sound

It is no secret the the music industry of Bollywood as well as the independent music industry of the country is dominated by people from the Northeast. In the backdrop of this scenario, we would like to introduce our readers with our homegrown talent Pingal Kalita, who is fast becoming one of the latest names to reckon with in the regional, national and international sound industries.

Originally from Tinsukia, Pingal Kalita is a Avid certified instructor from Avid Inc. USA, ProTools Expert Post from Alchemea College of Audio Engineering, London and a graduate degree holder in filmmaking from SAE Mumbai. Currently based in Germany, he works as a Technical Sound Engineer for international and European movies in the headquarters of ARRI Media, which is Europe's largest post-production facility, providing the highest level of creative and technical services. The company has completed 100 years of existence. The film, ‘Never Look Away’, of which he was a part of the sound mixing team, was nominated for the Oscar awards this year. He has also been part of many Russian, French, Turkish and Hollywood Productions here.

Back in Bollywood, Pingal works closely with AR Rahman and other big names in Bollywood and regional music industry. He was part of over 150 films while working in Bombay and the list can be found in the website IMDB which also include regional Punjabi, Telegu, Tamil, Marathi, Bengali (mostly Shree Venkatesh Films), Orriya, Mallyali, Pakistani as well as Bangadeshi films. Some of the Bollywood films he was part of were ‘Yeh Jawani hai Deewani’, ‘Raanjhana’, ‘Bang Bang’, Badlapur, Tanu weds Manu Returns’, ‘Highway’, ‘Brothers’, ‘Vicky Donor’, etc. The last Bollywood film he worked for was Tamasha with the team of AR Rahman at his home studio, which was installed by Pingal Kalita in 2009. The mélange team recently caught up with him for an absorbing interview. Following are excerpts. 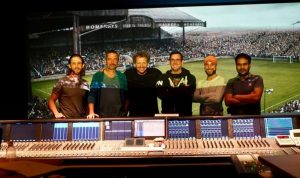 Ans: I was born in Tinsukia district of Assam and did my schooling from St. Stephens High School, Tinsukia. I completed my 12th standard in Science stream from Tinsukia College where my father was a lecturer of Inorganic Chemistry. My father is now retired and working as a principal in Inventure Academy while my Mother Jaya Kalita is a Science teacher in Sarvajanin HS Valika Vidyalaya, Tinsukia.

Though hailing from a family of teachers, my parents always gave me complete freedom to decide my career. Therefore after completing my 12th, I decided to pursue a career where I could fulfill my passion and also be satisfied with my work, just like the satisfaction I see in my parents’ eyes whenever they come across their successful students.

My mother is a radio artist and a classical singer and music teacher. She has also recorded a few modern Assamese albums through which I got to meet and see the studio environment early on in life. This experience played a major role in inspiring me to choose my present field although the work I do is not exactly related to music.

As a child I enjoyed watching movies like most other kids but I remember being very fascinated by the sound elements in the movies in particular. I knew most of the names which appeared in the credit list for the sound department and as fate would have it, I got a chance to work with most of them later on in Bombay. 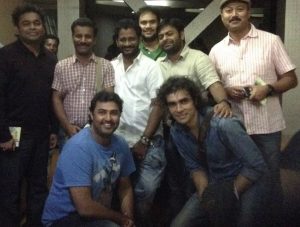 Ans: People often do not understand my job profile. A few well-wishers think that I work for the music industry as a musician which again is completely wrong. My work in a film is called as Re-Recording engineer and it primarily comprises of making a film sound the way it does. There are various departments, which contribute to the sound in a film, right from dialogues, which again can be at all locations – either live recording or studio dubbed. For instance, the Foley Department is responsible for producing sounds from rustling of shirts, touch, footsteps, etc while the Effects Department, also called as Sound Design, is responsible for replicating noises of cars, bullets, bombs or air/ ambience sounds, etc.

My work involves receiving all of the above and to balance all these elements together so that the audience receives the elements which the director wants to focus on. I have to work in close touch with the director and work on the sound elements which the director wants to bring out and make it compatible with various audio formats for screening in large theatres with 5.1/ 7.1 or Atmos from the Dolby Lab. I, along with my team, mostly work in large empty theatres where the director sees the movie for the first time with all the visual and sound elements combined together.

Ans: At present, I stay in Munich, Germany and am currently working with ARRI Media at their headquarters in Munich. ARRI Media is Europe's largest post-production facility, providing the highest level of creative and technical services. The company has completed 100 years of existence. I am working in this company as a Technical Sound Engineer for international and European movies. The film, ‘Never Look Away’, of which I was a part of the sound mixing team, was nominated for the Oscar awards this year. I have also been part of many Russian, French, Turkish and Hollywood Productions here.

After my education, I began working in Mumbai where I got a chance to work with a lot of my childhood heroes like Rishi Kapoorji, AR Rahman Sir, Asha Bhosleji, etc and also some comparatively younger talents like Sachin Jigar, Amit Trivedi, Ayaan Mukherjee, etc, to name a few. I was part of over 150 films while working in Bombay and the list can be found in the website IMDB which also include regional Punjabi, Telegu, Tamil, Marathi, Bengali (mostly Shree Venkatesh Films), Orriya, Mallyali, Pakistani as well as Bangadeshi films.

Back in Bombay, some of the films I was part of were ‘Yeh Jawani hai Deewani’, ‘Raanjhana’, ‘Bang Bang’, Badlapur, Tanu weds Manu Returns’, ‘Highway’, ‘Brothers’, ‘Vicky Donor’, etc. The last Bollywood film I worked for was Tamasha with the team of AR Rahman at his home studio, which was installed by me in 2009. I had been working with Rahman sir on all his projects since ‘Highway’, ‘Lekar Hum Deewana Dil’ and ‘Tamasha’ before moving to Germany.

In India, I also worked as an Instructor for certification courses in many Institutes like ‘Media School’ in Bangalore, ‘CPML’ in Pune, ‘Audio Garage’ in Mumbai and FTII, Pune. I write technical reviews on equipment related to my field for various magazines like Pro Sound.

Ans: The starting years for any individual in this industry is extremely challenging. Firstly the cultural shock and then we all had those extremely long inhuman working hours to prove ourselves.

I started my career in the sound industry in a technical role, consulting and helping small/big production houses and Television channels set up their own sound studios (Colors, Network 18, Yash Raj Films, etc.) and as well as provide technical support. In this process I met a lot of influential people in the business. Having installed a few large format consoles used for Mixing in Movies like Primefocus, I decided to start working from the other side of the table where I am involved more creatively rather than solving just technical issues.

Ans: Actually, they are very similar and different at times. Similar when it comes to the passion of the people involved to make the movie sound as close to perfect as possible, irrespective of how big or small the film is. All the industries witness the same struggles and arguments between music directors and sound designers on what should be more loud and more prominent.

One of the most noticeable differences is in the planning. In Germany, everyone involved gets at least their night’s sleep but the working hours in MUmbai were extremely unhealthy, leaving one with no personal time. For example, in 2014 I realized that I had spent every Saturday and Sunday of the year working in some kind of production or the other.

Ans: We are two siblings: me and my sister Priyanka Kalita, who is a Lecturer of English. As a kid I never saw my parents relaxing but also working on something in addition to their normal duties. My mother, besides her full time job and managing the home, also worked as a Classical Music Teacher and a Radio Artist, while my father helped countless financial struggling students clear there entrances in Engineering/ Medical courses. In November, 2017, I got married to Sonia Sharma who also works here in Germany as a Software Engineer. We are both based here in Germany at present.

I am presently working on a very interesting German film called Goldfische and then starting a Hollywood project in July. One future plan I am waiting for would be to get involved in at least one Assamese film. And I am also trying to outsource some sound work from Germany to help new struggling sound engineers in India.