MANGALDAI: Much has been said about maintaining the healthy academic environment in academic institutions and keeping these institutions totally free from any non-academic matter. But what will happen if the students of a premier college in the district headquarters have to suffer academic loss only to hold the elections?

The entire Mangaldai College campus has been used for elections at an interval of almost two years and every time the students have been compelled to sacrifice academic days for minimum 30 days to maximum 72 days, as the State government, elected representatives of the district and the district administration allegedly never cared about the academic loss of the students. There is no alternative arrangement except Mangaldai College being used as the strong room, counting hall, distribution and receiving centre of poll materials.

Principal of Mangaldai College, Dr Khagendra Kr Nath spoke about the unhygienic environment in the college campus and the poor plight of the students who are appearing in the ongoing second and sixth-semester exam since May 7, before media persons. “As many as 7,000-8,000 officials engaged in poll duty had taken their meals in the college campus on the day of poll and all the residue and waste food materials dumped in the campus have not been cleared even after more than three weeks. The temporarily used latrines are also polluting the atmosphere. Students appearing in the semester examination are finding it difficult due to the foul smell,” said Principal Dr Nath while talking to media persons.

The playground of the college, used for parking of hundreds of vehicles on the day of poll, also lies in a poor condition. The Principal has also alleged a lack of necessary cooperation from the district administration in finding a quick solution to these problems. 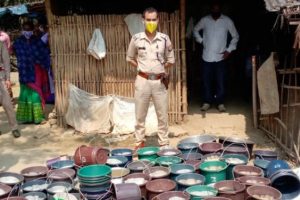