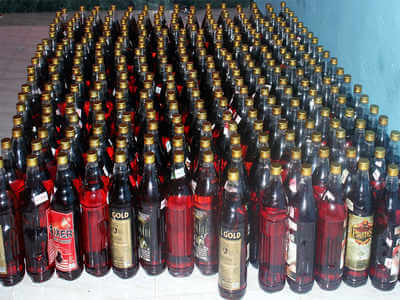 JOYSAGAR, July 16: Sapekhati Police, with the help of Sonari Divisional Excise sleuths, seized a Max pick-up van (AS-04-AC-9622) carrying illegal IMFL from Arunachal Pradesh on Sunday. The illegal liquor consignment was worth about Rs 1.50 lakh. One person was also arrested and he has been identified as Rajiv Sing. He was driving the van. But two other persons, Sanjay Sahu and Sanjiv Saikia, managed to flee.

Illegal liquor smugglers bring IMFL and other liquor from Arunachal Pradesh. They change the label on the bottles and put the sticker of Assam Excise. In this way they deprive both the Assam government as well as Arunachal Pradesh government of revenue. The Sivasagar Excise Department also conducted two separate operations against some illegal liquor sellers in Amguri town and in Nazira town on Friday and Saturday. In these operations also, excise officers busted many illegal liquor dens and seized many cartons of IMFL and country liquor.