Assam Must Follow Steps Like Manipur over Issues of Land Reservation, Jobs for Citizens of India From 1951: Upamanyu Hazarika

Guwahati: Prabajan Virodhi Manch (PVM) Convener, Upamanyu Hazarika on Tuesday claimed that regardless of NRC outcome, indigenous of the state can be saved from becoming a minority only if Assam enacts legislation alike the Manipur Assembly’s decision on July 23, 2018 of reserving land government benefits, employment only for those who were citizens of India in 1951.

In his two instances, Hazarika highlighted that, the State Government is going ahead with recruitment to the posts of Gaon Bura in different districts of Assam where a large number of discrepancies in the NRC process have come to light, with declared and suspected foreigners being included in NRC, the administration is proceeding with the appointment of Gaon Bura even before NRC final list has been published Government is proceeding with the recruitment where foreigners have been given the Government jobs.

“Already some appointments made in South Salmara, before finalization of NRC and Constitutional safeguards in terms of Clause 6 of the Assam Accord,” said Hazarika before the media. 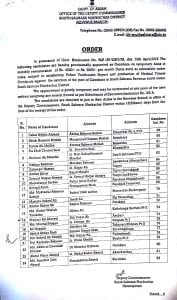 It is also learned that the district administration is proceeding with building houses under PMAY for these encroachers, asserts Hazarika.

“It is the corruption of votes and money which sustains the politicians, bureaucrats and protects the Bangladeshis,” said Hazarika further.

He also claimed that unless the land, resources, Government employment, Government benefits are reserved for those who were citizens of India in 1951, the indigenous people of Assam will become the victims of the corrupt politician and bureaucrat and will become a minority.

It may be mentioned that in Manipur, the cut-off date for granting citizenship on July 19, 1948.

Upamanyu Hazarika also highlighted the fact that when Manipur BJP led Government has undertaken a protective measure to safeguard the indigenous from Bangladeshi infiltration, Assam has taken the burden of 23 years of illegal migrants, unlike Manipur and the other North Eastern States.

He also questioned the State Government saying “When a BJP dominated state like Manipur can come forth with such protective legislation why can’t the Assam Government do it?”

Earlier, PVM had carried out a mass signature campaign in Upper Assam and parts of middle Assam and on May 19, 2018 over 6 lakh signature in support of reservation on 1951 basis have been submitted to The Prime Minister Narendra Modi.