Brisk preparations underway for the three-day long Celebration of 15th century saint-Scholar Srimanta Sankardev's 570th birth anniversary called as 'Guru Jayanti' in Batadrava, the birth place of the great Vaishnavite saint. The Guru Jayanti will be celebrated from 18 to 20 September, 2018. The three-day long celebration will start with 'Taal kubuwa' followed by Manjira Naam, Aaisokolor Nam, and Khol Prasang. An Assam level Borgeet Competition will be held at 1 PM in the evening preceded by the recitation of Guru Charit and an All Assam level Dihanaam Competition which will be held in the evening.

On 19 September, after the common naam prasanga, a Cultural procession will be launched which will be flagged off by Bhogeswar Borah, executive President of Batadrava Than Reception Committee. In the evening, total 570 earthen lamps will be lit and a Bhaona 'Nrisingha yatra' will be performed by the artists of Salaguri Satra ,Batadrava. 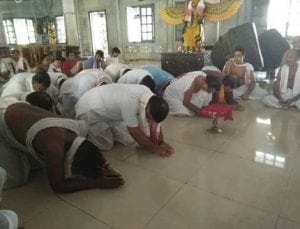 On 20 September, after the morning prayers, a religious meeting will be held under the Presidentship of Devananda Devgoswami. The meeting will be graced by distinguished dignitaries including State Water resources Minister Keshab Mahanta, State BJP president Ranjit Das, Owner of Satellite Channel 'Prag News', Sanjiv Narayan, Legislators Angoorlata Deka, Dimbeswar Das, and Rupak sharma and many others. In the evening various Sattriya cultural programmes as well as two Ankiya Bhaonas namely 'Seeta Haran' and 'Bali Badh' will be staged. It is worth mentioning that every year during the Guru Jayanti celebration lakhs of devotees throngs at Batadrava Than to offer prayers at kirtanghar and take part in the Grand Celebration.

The Assistant Secretary of Batadrava Than reception Committee, Indra Mohan Baruah has urged all sections of the society to extend their helping hand to make the programme a grand success.