Rahul Roy in his letter to APCC president claimed that Congress party has been opposing CAB’ 16, in fact, creating a distance among the regional communities in the region.

Rahul further stated in the letter that as a district president of the region, “I cannot implement this, as well as I condemn the approach of the Congress. I cannot go against my own community and people." 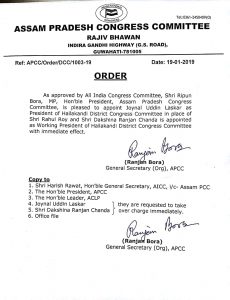