Over 300 stranded tourists rescued by Indian Army in East Sikkim

Gangtok: In a major rescue operation, the Indian Army on Thursday rescued over 300 tourists who were stranded in the snow-hit areas between Changgu and adjoining areas in East Sikkim.

The tourists were later bought from Changgu to 17 Mile in Army vehicles and subsequently evacuated to Gangtok. 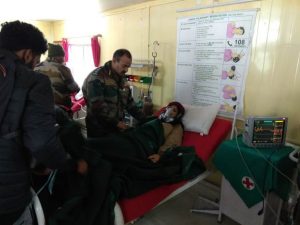 Speaking to the media, Defence spokesperson P Khongsai said that nearly 50 to 60 Civil vehicles, carrying over 300 tourists, got stranded near Changgu and adjoining areas.

"The Indian Army carried out a rescue operation in spite of snow blizzard in the area and evacuated all stranded tourists which included women, children and elderly persons to safety. There was a number of tourists who required immediate medical care due to the inclement weather and the effect of high altitude. They were evacuated in army ambulances and suitable treatment was also provided," P Khongsai added.