Guwahati: It has come to light to the Assam Police that some organizations like Koch Rajbongshi Sanmilani, Aboro Suraksha Samiti, All Koch Rajbongshi Students Union (AKRSU) and other organizations have called for Assam Bandh with effect from November 19 in protest against Unilateral Declaration of Union Territorial Council for Bodoland Territorial Area Districts (BTAD).

Based on the media report, Assam Police Director General Civil Defence & Commandant General Home Guards and I/C Special Branch, Pallab Bhattacharya contacted Interlocutor of peace talks AB Mathur today where he clearly expressed that no such arrangements have been made as pointed out in some sections of newspapers.

In a press statement, Assam Police has also requested the concerned organizations to withdraw the Assam Band called by them.

It may be mentioned that as per a report, a secret meeting was held in Delhi claims that the long-standing demand for a full-fledged separate ‘Bodoland’ state has now been rejected, however, the report also claimed that the autonomous territory and administrative power of the Bodoland Territorial Area Districts (BTAD) will be increased and upgraded as Union Territorial Council. 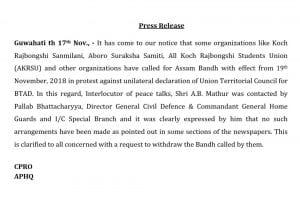 In the meeting, the Non-Bodo representatives have reportedly already agreed on papers that they would have no problem, if NDFB(P) joins hands to sign the peace accord with the Union Government and if BTAD is granted with more administrative & financial power along with the territorial expansion.

On Monday, the Centre is likely to be holding a joint meeting with the representatives of the All Bodo Students’ Union (ABSU) and National Democratic Front of Bodoland Progressive (NDFB-P).