Around 12,055 kilos of Marijuana seized so far this year in Assam: Police Report

Guwahati: Assam police have come out with yet another humorous post on social media, but this time it's on Drug Abuse. The police department on Wednesday shared a number '12055' on their Facebook page stating "No, that's not our new Anti-Drugs Helpline Number. This is the amount (in Kgs) of Marijuana seized by Assam Police so far this year, along with 12.3 Kg of Opium & 8.5 Kg of Heroin." 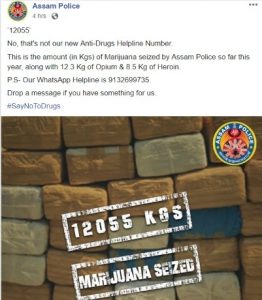 It is quite interesting to know that Assam Police along with CID on Wednesday also conducted an Awareness programme on Drug Abuse at B. Barooah College in Guwahati.

Speaking to the media, Commissioner of Police, Deepak Kumar said that Assam Police has launched a campaign against the 'Drug Abuse' in the state. "It has come to light that various college and school going students in the Guwahati city and other parts of the state are being targeted by the drug peddlers, hence, the department had decided to start an awareness campaign on the matter where we will highlight the ill-effects of drugs and help them to overcome the cause," said Commissioner of Police Deepak Kumar.

Assam police department also shared their Whatsapp Helpline number: 9132699735 where anyone can share their complaints on any crime related offence and other objectionable matters.

It is to be noted that under the Central Sector Scheme of Assistance for Prevention of Alcoholism and Substance (Drugs) Abuse for Social Defence Services, the Ministry of Social Justice and Empowerment states about:

The Scheme of Assistance for the Prevention of Alcoholism and Substance (Drugs) Abuse is being implemented for identification, counselling, treatment and rehabilitation of addicts through voluntary and other eligible organizations. Under this scheme, financial assistance up to 90% of the approved expenditure is given to the voluntary organizations and other eligible agencies for setting up/running Integrated Rehabilitation Centre for Addicts (IRCAs), Regional Resource and Training Centres (RRTCs), for holding Awareness-cum-de-addiction camps (ACDC) and Workplace Prevention Programmes etc. In the case of North-Eastern States, Sikkim and Jammu & Kashmir, the quantum of assistance is 95% of the total admissible expenditure. The balance has to be borne by the implementing agency.

The Scheme of 'General Grant-in-Aid Programme for Financial Assistance in the Field of Social Defence' aims to a. Meet urgent needs falling within the mandate of the Ministry which cannot be met under the its regular schemes and b. Support such initiatives of an innovative/pilot nature in the area of welfare and empowerment of the Ministry's target groups, as cannot be supported under its regular schemes. Financial assistance is given up to 90% of the approved expenditure to the voluntary and other eligible organizations. In case of an organization working in a relatively new area where both voluntary and Government effort are very limited but the need for the service is very great, the Government may bear up to 100% of the cost.

Furthermore, DGP Assam Police, Kuladhar Saikia informed that the Department will conduct the Awareness Programme on Drug Abuse in every nooks and corner of Assam in the coming days.