'Bogibeel Bridge' is a lifeline for people of Assam & Arunachal: PM Modi

Dibrugarh: Prime Minister Narendra Modi after inaugurating the Bogibeel bridge on the birth anniversary of former PM Atal Bihari Vajpayee at Dibrugarh on Tuesday crossed the bridge in his convoy to the north bank of Brahmaputra to flag off the Tinsukia-Naharlagun Intercity Express. 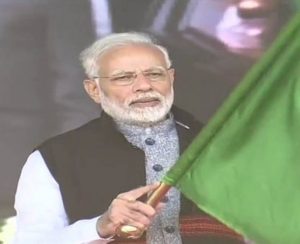 As per reports, the train will run five days a week. The 4.9-km bridge will cut down the train-travel time between Tinsukia in Assam to Naharlagun town of Arunachal Pradesh by more than 10 hours.

Addressing the mass gathering at Dhemaji today, Prime Minister Narendra Modi said, “Today is a historic day for the Northeastern people. I dedicate the country’s longest rail-cum-road to my countrymen. I am feeling very happy today. I pay my regards to the Ahom ruler of the state Chaulong-Sukapha, Ahom Secretary General Bir Lachit Barphukan, Bir Chalarai and other freedom fighters of the state. This is a day of good governance, today the BJP party finally made the dream of former Prime Minister of India Atal Bihari Vajpayee is dream come true with the inauguration of the Bogibeel Bridge today. From the last four years, the BJP party both in Central and State are being headed towards good governance for the people of the nation. Bogibeel Bridge which is India’s first road-cum-rail bridge is made completely of steel and is above 30 feet above the water level. This is not only a bridge but a ‘lifeline’ to the people of Assam and Arunachal Pradesh. Now the distance from Itanagar to Dibrugarh town has been decreased from 700 km to 200 km.” 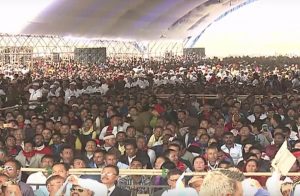 He also highlighted the fact that earlier people of Dhemaji, North Lakhimpur and Arunachal Pradesh had to face many problems to reach the southern bank of Brahmaputra as they travelled from North to South with a boat. Hence, to curb this situation, the 14 coach direct train Tinsukia-Naharlagun Intercity Express would now bring a sea of change in both the region, stated PM Modi.

“There has been a gap of generations since the inception of the Bogibeel Bridge project, the dream finally became a reality today. Now people can travel to Delhi, Mumbai, Kolkata, Bengaluru directly from Dibrugarh. The people of Upper Assam won’t have to travel to Guwahati to travel the metro cities from now on. Also, in education, business and health sectors, people from Dhemaji, North Lakhimpur can travel to Dibrugarh which one of the most happening sectors of Northeast,” added Prime Minister Narendra Modi.

PM Modi also congratulated the people of Assam for making him part of two mega projects of India, one the longest road bridge Dhola-Sadia and second the rail-cum-road bridge Bogibeel Bridge.

It may also be mentioned that the Bogibeel bridge will be connecting the south bank of the Brahmaputra river in Assam’s Dibrugarh to Silapathar in Dhemaji bordering Arunachal Pradesh.

The 4.9 km-long bridge on the Brahmaputra river boasts of being Asia’s second-longest rail-cum-road bridge.

Technically, this bridge has a ‘serviceable period of around 120 years. Moreover, this Bogibeel bridge was built by Hindustan Construction Company(HCC).

It may further be mentioned that this bridge has a two-line railway track on the lower deck and a three-lane road on the top deck.