Guwahati: The Ministry of Home Affairs through a Gazette of India had notified that the Central Government appointed January 10, 2020, as the date on which the provisions of the Citizenship Amendment Act, 2019 shall come into force.

As per the Gazette of India, undersigned by Anil Malik, Additional Secretary, Ministry of Home Affairs stated, “In exercise of the powers conferred by sub-section (2) of section 1 of the Citizenship Amendment Act, 2019 (47 of 2019), the Central Government hereby appoints the 10th day of January 2020, as the date on which the provisions of the said Act shall come into force.” 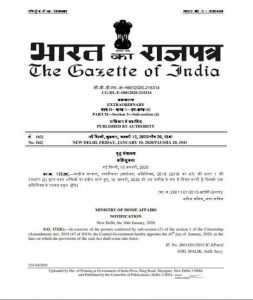 It may be mentioned that the state had been reeling under protests since CAA came in. The indigenous population of the state fears getting overwhelmed by the arrival of ‘foreigners’ through this Act. People also see CAA as a violation of Assam Accord according to which foreigners entering Assam, irrespective of their religion or language, after 24th of March 1971, do not qualify for citizenship.