Bongaigaon: Based on a tip-off, Bongaigaon Police on Friday seized fake currency notes worth Rs 30,600 of Rs 100 and 200 denominations and arrested three persons in connection to the incident.

The operation was carried out under the supervision of officer in charge Jyoti Lahon on Bongaigaon Police Station.

As per the police report, the operation was carried out based on secret information.

Sources also informed that the police had arrested two people from Goraimari near National Highway in Bongaigaon and another accused from Manikpur Thana area.

The accused were identified as Abdul Rahman, Ainul Haque and Sudip Biswas.

On Saturday, all the three accused were produced before the court. 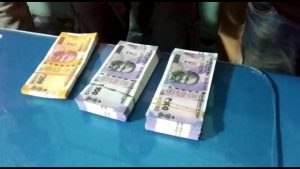 It may be noted that the Fake Indian Currency Note (FICN) is a term used by officials and media to refer to counterfeit currency notes circulated in the Indian economy. In 2012, while responding to a question in parliament, the Finance Minister, P. Chidambaram, admitted that there is no confirmed estimate of fake currency in India. However, several central and state agencies are working together, and the Ministry of Home Affairs has constituted the Fake Indian Currency Notes Co-ordination Center (FCORD) to curb this menace.

On 8 November 2016, Prime Minister Narendra Modi announced that the hitherto existing 500 and 1000 rupee notes cease to be legal tender. He said that the move is taken to curb black money and widespread counterfeit currency in the country. He introduced new ₹500 and ₹2000 notes, and discontinued the hitherto existing ₹1000 note.

Although fake currency is being printed with precision, the Crime Investigation Department (CID) says that they can be detected with some effort. Currency printed by local racketeers can be detected easily as they use the photographic method, hand-engraved blocks, lithographic processes and computer colour scanning. In counterfeit notes, the watermark is made by using opaque ink, painting with white solution, stamping with a dye engraved with the picture of Mahatma Gandhi. Then oil, grease or wax is applied to give the picture a translucent feel. In genuine notes, the security thread is incorporated into the paper at the time of manufacture. But in fake notes, the security thread is imitated by drawing a line with a pencil, by printing a line with grey ink, or by using aluminum thread while pasting two thin sheets of paper. Forgers find it difficult to reproduce the same shape of individual numbers again and again with accuracy. The alignment of the figures is also difficult to maintain. Spreading of ink, smaller or bigger number, inadequate gaps, and different alignments in numbers should be regarded with suspicion. In counterfeit notes, the printed lines will be broken and there may also be ink smudges. In recent times it has been reported that FICN match 10 out of 14 security parameters adopted by the Indian government, with suggestions that the highest quality fakes could have only been produced by a nation-state.