Dibrugarh: A major fire broke out at Thermal Niz Kadamoni in Dibrugarh on the midnight hours of Saturday.

As per eyewitnesses, the fire broke out at around 1.30 am due to a cylinder blast.

So far 5 persons including two men, one woman and two children died in the fire incident. 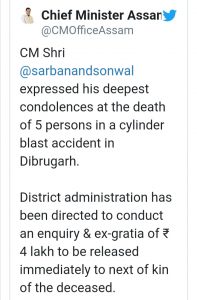 Also, Chief Minister Sarbananda Sonowal expressed his deepest condolences at the death of 5 persons due to a cylinder blast accident in Dibrugarh.

Meanwhile, Dibrugarh District Administration has been directed to conduct an enquiry and ex-gratia of Rs 4 lakh to be released immediately to the next of kin of the deceased.