In a major incident involving the IT Act, a person identified as Raja Sur, son of Ashok Sur from Tulupatty area of Silchar has been accused of posting derogatory statement against Sushmita Dev, the member of Parliament for Silchar Constituency. 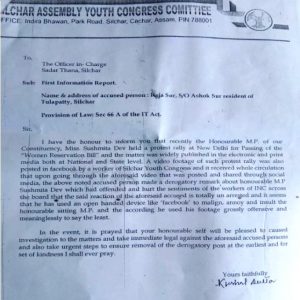 It may be mentioned that Sushmita Dev held a protest rally at New Delhi for passing of the “Women Reservation Bill” and a video footage of that protest rally was posted on Facebook by a worker of Silchar Youth Congress. In that shared video, the accused person made the offensive comment which had severely hurt the sentiments of the workers of Indian National Congress. The INC members said that the convicted used the social media platform Facebook to malign and insult their member of parliament.

The complainants stated that they want immediate legal action against the convicted person and also to remove the derogatory post as soon as possible.