Dibrugarh: The Dibrugarh NCC team which was part of the North Eastern Region (NER) Contingent that was crowned champions for the first time in this year's Republic Day competition in New Delhi were accorded a rousing welcome on their arrival at Dibrugarh Railway Station on Wednesday. The 11 cadets were received by officers, JCOs, NCOs and fellow cadets of NCC Group Dibrugarh on their arrival by the Rajdhani Express. 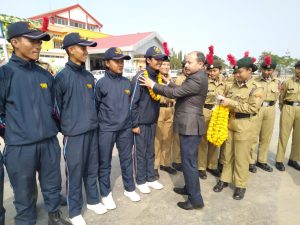 Never before in the history of the north-eastern region, any NCC contingent has won so many awards or any contingent been adjudged best overall contingent in the Republic Day camp out of 17 contingents from all over India.

The contingent was led by Col Jitendra Kumar, SC, CO 63 Assam (Girls) Battalion NCC who inspired and led the team to success during the grueling series of the competitions.