Guwahati: At the wake of Independence day celebrations in Assam, the United Liberation Front of Assam (Independent) (ULFA-I) has called for the people of Assam to boycott the celebrations.

In a joint press communiqué, the Co-ordination Committee (CorCom) and United Liberation Front of Asom (Independent) (ULFA-I) has said asked the people not to take part in the celebrations as a mark of protest.

“When sovereignty is being attacked to promote Indian empire, at the behest of the rulers who live on the spoils of an unjust war on peoples of WESEA (Western South East Asia); we resist with liberation war. Indian colonial war causes insurmountable human toll. WESEA is, today, a battlefield where thousands of Indian occupational war bastions exist. India deploys at least a million strength occupational force who are organized into various overt and covert organizations—Military, Para-military, Armed Police, Intelligence, and Fifth Columnists. The oppressed peoples of WESEA could not enjoy respite from these criminals who enjoy impunity under Black Laws — National Security Act, Unlawful Activities Prevention Act, Armed Forces Special Powers Act, etc.”

Appealing the people of Assam, the ULFA-I further stated that, “We, the above-mentioned revolutionary organisations, therefore, are jointly calling to boycott Indian’s Independence Day celebration in the region on 15 August 2018 and beseech the entire peoples of our Region to be alert and make the Boycott a complete success as was done as before, as a mark of solidarity against Indian occupation.” 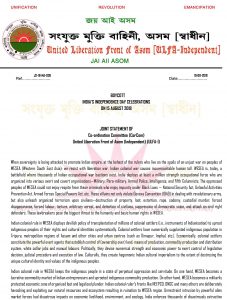 Press Communique from the Publicity Wing of ULFA (I) (Pg1) 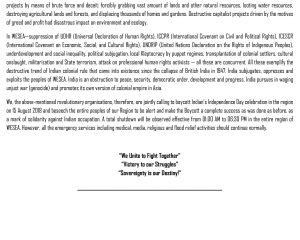 Press Communique from the Publicity Wing of ULFA (I) (Pg2)

The militant organization has also called for a total shutdown from morning to evening on August 15.

Meanwhile, Assam Director General of Police Kuladhar Saikia told media that security measures have been made stringent and also added that he is in constant correspondence with his counterparts in Meghalaya and Arunachal Pradesh regarding security offensive and counter-insurgency ops against banned terrorist outfits in neighbouring areas of both the states.

DGP Saikia said, “Both Meghalaya and Arunachal Pradesh Police have been on high alert and we have asked them to carry out robust anti-insurgency offensives against terrorists in bordering areas of Assam. Section 144 has also been imposed in certain places in the state so that terror operatives can’t create any disturbance in the preparations for the Independence Day celebration.”

He assured that the Assam Police is ready to counter and foil any such untoward activities by militant outfits and that additional units of armed forces have been deployed in sensitive zones.