Tinsukia: The Assam Police along with security forces apprehended one ULFA(I) cadre and three linkmen in a joint operation at Chikrajan area in Bordumsa on mid-night hours in Tinsukia District. 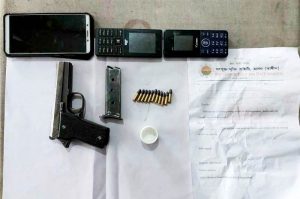 The security forces seized one .22 pistol, one magazine, 11 rounds of bullet, one note pad, three mobile handsets and two motorcycles from their possession.

As per police, the operation was launched under the supervision of Additional Superintendent of Police Ripunjoy Kakati.

Meanwhile, the apprehended cadre and linkmen are interrogated by the Tinsukia Police.