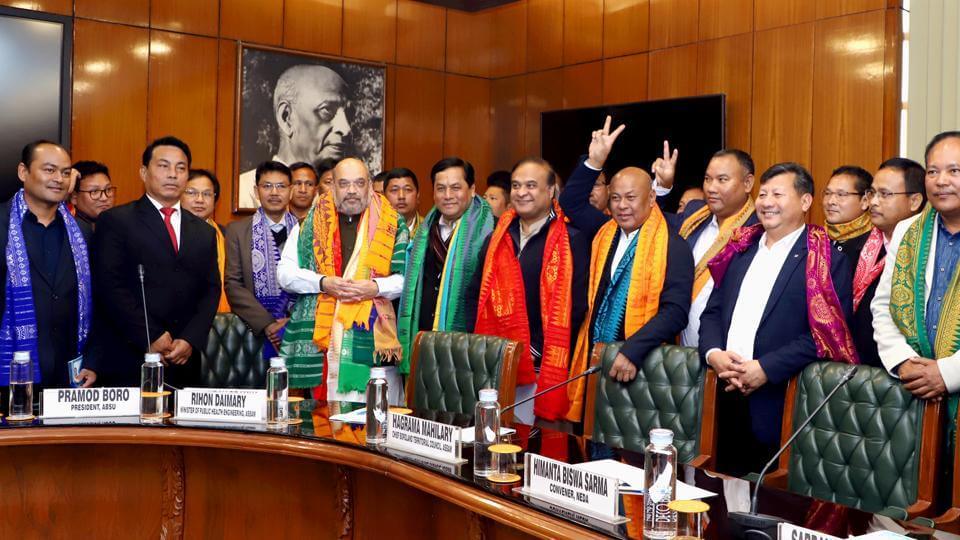 The signing of the Bodo peace accord on January 27, 2020, in New Delhi is a reconciliatory step for abjuring violence and embracing the path of peace and non-violence. The All Bodo Students’ Union (ABSU), the four factions of the National Democratic Front of Bodoland (NDFB) and the civilian pressure group United Bodo People’s Organization (UBPO) signed the peace accord, the third accord so far, with the Central and the State governments. The accord is aimed at addressing the decades-old Bodo crisis in Assam. The accord, if it succeeds, will end insurgency and violence in the hitherto boiling Bodo heartland. Apart from a new wave of peaceful transition in Bodoland, the accord transfuses a prism of peace in entire Northeast India.

The agreement entrusts the Bodoland Territorial Region (BTR), a rechristened administrative unit from existing entity Bodoland Territorial Council (BTC). The new accord, apart from providing a number of academic institutions and a sizeable amount of financial package, also provides the Bodo-Kachari Welfare Council for what is stated to be the ‘focused development’ in the Bodo-inhabited areas outside the present council. The UBPO, one of the signatories, had been demanding such an arrangement for the last couple of years.

Would peace prevail in this new dispensation? Apprehension exists among the signatories and Oboro (non-Bodo) organizations as well. Why do people fear that peace be sabotaged again?

The Memorandum of Settlement (MoS) states that the BTR would have more legislative, executive, administrative and financial powers than what the existing council possesses. But this ‘more’ powers is not clearly defined. The ambiguous ‘more’ may be the bone of contention and counterchallenge in the course of implementation. This is what circles concerned fear about. If true autonomy is not delivered as intended, this third accord may also fail like the previous two.

The peace accords of 1993 and 2003 failed miserably to fulfil the core demands raised by the Bodos. These two accords ended up sub-optimal. The statehood demand was never been satiated. The Bodoland Autonomous Council (BAC) accorded in 1993 was an utter failure. Even the boundary demarcation was drawn by the then State government. The agreement remained only in paper, without being implemented in letter and spirit. What emerged post-BAC was even dangerous for the Bodos. The Bodo Liberation Tigers (BLT) was formed in 1996 for armed struggle aimed at creating a Bodoland state. The BLT signed the second tripartite peace accord with the Central and the State governments in 2003, leading to the setting up of the Bodoland Territorial Council (BTC), a politico-administrative entity created under the provision of the Sixth Schedule of the Constitution of India. This administrative unit having the jurisdiction in four districts viz., Kokrajhar, Chirang, Baksa and Udalguri what is together called as the Bodoland Territorial Areas Districts (BTAD) possesses the legislative, executive and administrative powers on almost forty policy areas.

A natural question is: why did the BTC fail to address the aspirations of the Bodos? The reformed BLT cadres formed the Bodoland People’s Front (BPF) and have been ruling the BTC since its inception. The party has been in coalition with successive Assam governments as well. First, it was with the Tarun Gogoi-led Congress government and now with the Sarbananda Sonowal-led BJP government. The Council Assembly was empowered to legislation in subjects relating to socio-economic uplift, education, land rights, etc. In 17 years of existence, it passed a total of 26 Bills, including that of education. Of them only 3 became Acts. The Assam Cabinet uses veto power on the Bills which the BTC Assembly passes, and ultimately prevents them from becoming Acts. Where is power then? The BPF being in a coalition with the BJP couldn’t convince to clear its Bills en route to His Excellency the Governor of Assam for his assent. Where is the political acumen of the BPF even after having 17 years of political rehearsals and lessons?

Another problem is mushrooming Oboro organizations such as Oboro Eikyo Mancha, Oboro Suraksha Samiti, BTAD Sena, etc, post-BTC formation in Assam. These are the forces sowing hatred otherwise coexisting and peace-loving distinct communities in the council areas. These are handiworks of narrow and corrosive minded people. Who consents them to form such communal organizations threatening the identity of distinct communities? Social harmony, a precondition of economic progress cannot be bashed. In the name of dirty political polarization, this unconstitutional concept should not be radicalized.

There have been constant false claims to instil a fear that the rights and privileges of non-Bodo communities are snatched way. The present council has a total of 46 seats. Forty are elected and 6 are nominated from unrepresented communities residing in council areas. Out of 40 elected, 30 are reserved for scheduled tribes (ST), 5 are reserved for non-tribals and 5 are open for all communities. Now in the BTR, seats have been increased to 60. Therefore, there is the possibility of either more seats reserved for non-tribals or open for all communities. Where is the ground for snatching the rights and privileges of non-Bodis away? Ironically, the Oboros have their own Member of Parliament (MP) won twice from Kokrajhar Lok Sabha (ST) seat. Naba Kumar Sarania is only an MP who is successful in dividing electorates on the basis of language in his constituency. In fact, the Bodos are more deprived now.

The population is a bone of contention in the existing council. Census of India 2011 data shows that the Bodos constitute over 30 per cent of the total population which is also the single largest community. In the proposed BTR, the percentage of the Bodos would exceed what is there in the existing council. A commission headed by a retired judge would be formed as stated in the accord. It would study the feasibility of exclusion of non-tribal inhabited villages from the existing council contiguous to non-Sixth Schedule area and inclusion of tribal-inhabited villages contiguous to the existing council into the BTR. Sarania’s claim of the Bodos constituting one-fourth of the total population is a statistical lie. The BTR does not need communal falsehoods. Instead, it needs everybody’s effort for vibrant and inclusive growth and development.

Why did the NDFB, once fighting for the sovereign Bodo nation, and the ABSU for a full-fledged Bodoland state settled today at the autonomous council? The ABSU has been trying to bring the complete end of armed conflicts and for creating an arms-free Bodo society. Coming of the splinter faction of the NDFB from its hideouts in Myanmar last year in December into the peace talks is a joint effort to abjure armed struggle in the Bodo heartland. The jubilant Bodos welcomed the agreement and the peace packages. Now the Bodo society gets rid of militancy. That is the biggest achievement. There would be no more brunt of insurgency and alleged extra-judicial killings as well. The BPF supremo and council chief Hagrama Mohilary, even though sceptical about the accord, believe it would end the gun culture in the society.

Over 34 years of fight with arms in hand for aspirations, the Bodos lost more than what it gets today. Over five thousand lives were sacrificed. The economy got destroyed, many families are now poverty-stricken, and the human resources have been converted to militants. The latest accord is a new era of peace and so it’s the joyous moments for the Bodos. In fact, it is a peaceful transition in Assam. If the accord fails at the implementation level, there is a likelihood of democratic and political movements for pressurizing the governments but the present scenario tells there won’t be any more insurgency. It would be a new height for the Bodos.

The Bodos chanted ‘no Bodoland, no rest’ and ‘divide Assam 50:50’ slogans for almost fifty years. Now, they have settled this long-drawn vexed imbroglio without affecting the territorial integrity of Assam. Perhaps, it would bring more closeness and feeling of brotherhood in Assam.