Justin Bieber, the Canadian singer-songwriter is engaged to American model and television personality Hailey Baldwin. The duo had previously dated each other from December 2015 to January 2016 before their apart. But they reunited in May 2018 and obtained a marriage license in September 2018.

Hailey Baldwin, on September 14, wrote on Twitter that she and Bieber had not yet married, although they were planning for the upcoming ceremony. However, sources said that the newlywed Justin Bieber has just rented a huge manor in Los Angeles, and it is costing him a pretty penny.

The renowned pop singer tied the knot secretly with Hailey Baldwin in September and the 24-year-old singer is renting a Spanish fashionable home in Toluca Lake for close to around Rs.7,406,570 per month, a real estate source confirms. It may be mentioned that the house was recently listed for sale for $8.5 million but Bieber preferred for a month-to-month rental contract instead of opting to purchase the home. According to the source, the short-term arrangement is the reason for the high monthly fee. 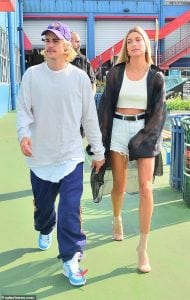 However, two years back the waterfront house was completely rebuilt, and now the house stands at 7,000 square feet. It has five bedrooms and seven baths rooms which also consist of a complete professional recording studio, a gym, a six-car garage, a spa and a pool, and a private dock out back with two paddle boats.

Along with it, an open-concept floor plan completes the home as a place perfect for entertaining, says the real estate source. The house also boasts a chef’s kitchen with white marble countertops and over 600 square feet of covered patio space. The sprawling master suite has a “massive walk-in closet,” a “luxurious spa-like bathroom,” and a large adjoining lounge area.

The youth icon Bieber and Baldwin, 21, did the secret wedding in New York City on Sept. 13, just two months after getting engaged. A family member said that the couple went ahead and did it without listening to anyone. As per a media source, they were legally married at the courthouse and will be having a religious ceremony and celebration with their near and dear ones soon.