Pictures of Katrina Kaif, where she was seen wearing a yellow dress, were shared online. The actor can been seen entering into Anurag Basu’s residence and posing for pictures. Other pictures show her taking blessings from a ‘pandit’. Whereas Abhishek Bachchan seen wearing a kurta pyjama was seen having a conversation with Basu. Abhishek will appear in the filmmaker’s next film, an ensemble piece also starring Rajkummar Rao, Fatima Sana Shaikh, Aditya Roy Kapur, Sanya Malhotra and Pankaj Tripathi. 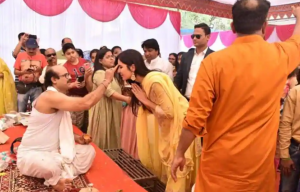 Other actors seen at the puja include Patralekhaa, who was dressed merely in white and arrived together with her sister, TV actor Ishita Dutta, who wore a blue dress, Sakshi Tanwar, who like Katrina wore yellow, Sumona Chakravarti and Asha Negi.

Check Out Some More Pictures Here:

Basu is known for films like Life... In a Metro, Barfi and Jagga Jasoos. His new film additionally said to be within the vein of Life... In a Metro, features intersecting stories. “It is my pleasure to be working with Bhushan Kumar for my next that is a dark comic anthology. It’s our first collaboration but doesn’t seem like one. I am extremely happy to have found this talented new generation cast, though I will trust my old friend Pritam for music as always,” Anurag Basu said in a statement.

The moviemaker hosts the puja annually. Katrina had additionally attended last year when she wore white colour dress. Others celebrities that spotted at the 2018 puja include Aditi Rao Hydari, Ragini Khanna, and Siddharth Roy Kapur.