Anurag Kashyap Goes All Out In Praise of Gulaal Actor Savi Siddhu, Says He Is Proud of Him

Just a day after the reports aforesaid Gulaal actor Savi Siddhu was forced to work as a watchman to support himself, the film’s director Anurag Kashyap wrote a series of tweets hailing him for choosing to live his own life with dignity rather than turning into an alcoholic or wasting himself away.

A media report claimed on the weekday that Savi Siddhu has been working as a watchman in a housing society and his financial condition doesn't even allow him to watch a movie. “I am extremely influenced by Amit ji and Dharam ji. But people told me that I'll get to build my own identity. Isliye fir bhoot utar gaya. Now, I'm working as a watching at a building in Malad with a hope that my bank balance will increase and that they (filmmakers) can offer me an opportunity. I do know they're going to say no. I have always received a positive response from them. They're anticipating me, Mai aa Raha Hoon,” Savi had said in a video by Film Companion. 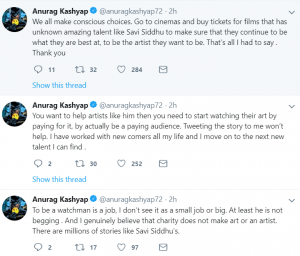 Anurag Kashyap said he has respect for Savi as the actor is supporting himself with dignity. “There are so many actors out there who don’t have work. I respect Savi Siddhu as an actor and have cast him thrice when he earned the role. I respect him that he chose to live his life with dignity and picked a job unlike so many entitled out of work actors who have either become alcoholics or wasted themselves away. Nawaz used to be a watchman, I used to be a waiter, I met one actor who sells bhelpuri on streets, I know an actor from Black Friday who drives a rickshaw, the lead from Salaam Bombay used to do the same,” Anurag wrote in a series of tweets. 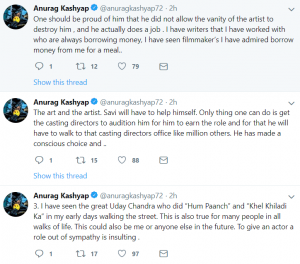 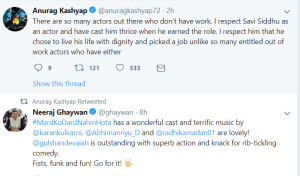 Anurag Kashyap has worked with Savi in 3 films - Gulaal, Black Friday and Paanch. “I have seen the amazing Uday Chandra who did Hum Paanch and Khel Khiladi ka in my early days walking the street road. This can be also true for several individuals all walks of life. This might even be me or anyone else in the future. To allow an actor a role out of sympathy is insulting. The art and also the creator... Savi will have to facilitate himself. Only factor one will do is getting the casting director to audition him for him to earn the role and for that he will have to walk to it casting director office like million others. He has made an aware choice and one should be proud of him that he didn't allow the self-importance of the artist to destroy him, and he actually does a job. I even have writers that I have worked with who are always borrowing money, I even have seen the filmmaker’s I even have admired borrow cash from me for a meal.”

Start watching their art by paying for it, by actually be a paying audience. Tweeting the story to me won’t facilitate. I even have worked with newcomers all my life and that I move to succeed in new talent I can find. We all make a conscious choice. Visit cinemas and buy tickets for films that have unknown wonderful talent like Savi Siddhu to create positive that they still be what they're best at, to be the artist they need to be. That’s all I had to say. Thank you,” he signed off.