In his last film, Shree Narayan Singh dealt with the lack of proper toilets in Akshay Kumar's household that transforms his blossoming romance with Bhumi Pednekar into an all-out war with the society and the system as a whole. In his latest, 'Batti Gul Meter Chalu', Singh tries to bring another important issue (erratic power supply, faulty billing,etc) to the fore that has been plaguing the common man for decades now. Kejriwal raised the issue during his election campaign and was able to slash the electricity bills by 50% when he finally came to power, thus proving up to what extent we were being looted.

A similar picture presented itself in the telecom sector when JIO came in with its unusually low plans and we saw every other service provider slash their rates to the same low level, proving that they were ripping us all this while. Thus, 'Batti Gul Meter Chalu' becomes an important film in the current context. With the attention of the common man transfixed on a court case that is more of a platform for mouthing the voice of the oppressed than anything else, the film undertakes its journey from the heartlands of Uttarakhand to our hearts with Vikas (Development) and Kalyan (well-being) serving as our semi-narrators.

SK (Shahid Kapoor), Nauti (Shraddha Kapoor) and Tripathi (Divyendu Sharma) are childhood friends and live a happy life. While SK is a morally corrupt lawyer who earns his living by blackmailing people, Divyendu has just put up his own factory and is working to earn a decent and dignified living. Nauti is a darzi (Tailor) in SK's words but considers herself a fashionista. Disaster strikes their friendship when Tripathi is slammed with an electricity bill of 54 lakhs by STPL which spirals him into a suicidal spree leading to his death. SK now takes it upon himself to get even with STPL and bring what can be called a semblance of justice to his dear friend and hundreds of others who have been wronged by the same company.

'Batti Gul Meter Chalu' derives its drama from two components. The court case and the dynamics between the three friends. The courtroom drama works well and it does so purely because of the amount of charm Shahid Kapoor brings to the part. He effortlessly shifts gears between the comical and the dramatic and his transition is so smooth and flawless that the viewer will never feel any of the elements to be forced.YamiGautam feeds him the needed opportunities to showcase his range. One has to agree that the court case is nothing like what a real court case is like. It is neither gritty not realistic but it is gripping nevertheless. A lot of buffoonery is on display and most of it feels apt in a film that doesn't take itself too seriously. Hence it's not difficult for the audience to sync in with the narrative and just enjoy themselves.

This would have been a straightforward courtroom drama but that is not the case because of the simmering drama between the three friends. This part really adds a dimension to the film and I believe it was a good idea to have introduced it. Not only does it raise the stakes for Shahid's character to prove his worth but also introduces us to some interesting friction between his and Shraddha's character that was interesting to watch.

Having said that, the only place where the narrative fails is in the first half when the camaraderie of the three friends is being set up. It takes forever for the film to arrive at its core when the director could have easily done away with a lot of the stuff in between. In his defense, he may say that those sequences were critical in warming us up with the characters, their lives and how they lay back on each other to extract serious emotions in the later parts of the film. Well! If that was to be the case, then he should have made these sequences a lot more engaging which they are not.

Shahid Kapoor is terrific in a role that suits him perfectly. After being in the shadow of Ranveer Singh for the most part in Padmaavat, he gets a film where he can use his quirky comic timing and the lovable boy-next-door persona to the fullest. Not just that, he totally works in the dramatic sequences where he largely emotes through his expressions and eyes. Shraddha Kapoor is getting better and better with every film and here too, she doesn't do a bad job. She is still a little inept in dramatic sequences but does well in the comic ones. A little more work and she will be a bankable lead. 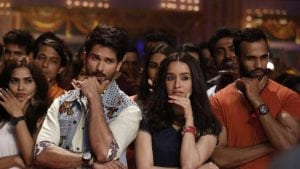 Divyendu is perfect in the initial sequences and does even better in the later sequences when he is shown being hassled by one and all. He has the kind of look that almost matches up with any and every shade of a character that he wants to drive home to. YamiGautam is pretty and even though she looks and behaves nothing like a lawyer, her act is in perfect sync with the mood and feel of the film. I loved her give and takes with Shahid Kapoor's SK.

Overall, 'Batti Gul Meter Chalu' raises important issues and has its heart in the right place. It has a stellar performance from Shahid Kapoor who literally carries the film on his shoulders. It has comedy, it has drama and it captures your imagination with its story by the time the curtains roll. My only complaint with it is it's unnecessarily stretched first half where nothing important or gripping happens for a large part. The songs are a bore too and only add to the misery of an already overlong runtime. This would have been a great film had it been an hour short.