Kangana spoke about donning the hat of a director for film Manikarnika, gender parity, plight of crew members and junior artists in the film industry. She also praised the efforts of the government for the India Pavilion at Cannes. “I really appreciate the Ministry for their efforts to have this place in middle of this (Cannes) Festival. It is such a remarkable achievement.” She said. Khare appreciated Kangana for speaking in Hindi at the India Pavilion. “I would like to thank and express my gratitude towards Ranaut that she started this conversation in Hindi.” Khare said. “It is important to have dialogue with collective art forms and I would agree with Kangana that it is important to reach out to smaller cities.” Khare added. 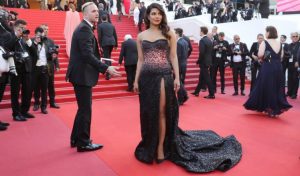 For her debut at the Cannes Film Festival red carpet, actress Priyanka Chopra Jonas looked fiery in a bold black and red embellished ensemble, a custom creation by Roberto Cavalli. She carried the strapless gown with a thigh-high slit with panache. The former Miss World took to the red carpet with a smile on her face and folded her hands to gesture ‘Namaste’. Her accessories were limited to statement earrings, while her hair was left simple in loose curls.

Priyanka is at the gala for a brand association. Earlier on Thursday, she was seen here in a white ensemble inspired by what the late Lady Diana once wore to the Cannes Film Festival. Priyanka had made cryptic Instagram posts ahead of her visit to the Cannes Film Festival, suggesting that her outfits may be inspired by fashion icons such as Lady Diana, Grace Kelly and Sophia Loren. (IANS)