Bollywood’s livewire Ranveer Singh could not stop gushing about his actress-wife Deepika Padukone’s “lime green” look at the 72nd Cannes Film Festival. Deepika, who is representing a cosmetics brand at the festival, opted for a lime green Gambattista Valli gown paired with Lorraine Schwartz jewellery for the red carpet. The “Padmaavat” actress then took to her Instagram to post a string of photograph in the ensemble.

An ecstatic Ranveer couldn’t stop himself from commenting on the photographs. Ranveer commented on a photograph showing Deepika’s long train as she climbed the stairs. He wrote: “Nuts.” Praising the “Piku” star’s close-up image, Ranveer commented: “Wow... I mean... Wow.” In a photograph, where Deepika is seen posing for the camera, Ranveer wrote: “Hahahahahahaah yeeeeehaaaaaaah baby let em know”. (IANS)

Singer-actor Nick Jonas was not able to join his wife Priyanka Chopra Jonas for her debut appearance at the red carpet of the 72nd edition of Cannes Film Festival, but he arrived in time to accompany her on the second day of the gala. The two were spotted walking hand-in-hand in the French city on Friday, creating couple goals like always. The “Quantico” actress even took to Instagram to share a few photographs of herself with her beau. 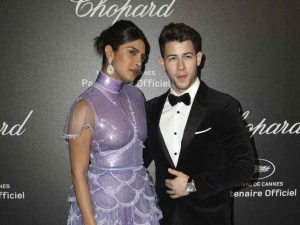 “My happiness begins with you, Nick,” Priyanka captioned one of the images in which she is seen leaning her head on Nick’s shoulder. After getting papped in the afternoon, the couple made the heads turn later at Chopard’s party with their glamorous looks. Priyanka wore a short purple dress along with silver jewellery for the party, while Nick looked dapper in black suit. Known for their PDA, Priyanka also uploaded a video of herself kissing Nick in a car, calling it a “fun shit”. (IANS)

After attracting eyeballs for her Cannes debut, TV star Hina Khan launched the poster of her first film “Lines”, which is set in the backdrop of the Kargil War, at the 72nd Cannes Film Festival. The poster launch took place at the festival’s India Pavilion on Friday after which Hina, dressed in a chic green outfit, gave a talk along with the “Lines” team on stage. The poster that has Hina’s face with maps of India and Pakistan in the background, gives away the theme of the film.

“Lines” depicts the story of a strong young woman portrayed by Hina living on the country’s border (LoC) with special emphasis on her struggle and problems of daily life. “Emotions don’t change because of the borders in between, the life and plight of Nazia is a simple portrayal of any girl who faces the magnitude of ordinary challenges in a not so ordinary story.” “‘Lines’ is my debut in films,” she captioned the poster, which she shared on Instagram on Friday as well. “Lines”, a film by Hussain Khan, is produced by Rahat Kazmi, Tariq Khan, Zeba Sajid and co-produced by Jayant Jaiswal’s Hiro Faar Better Films. (IANS)

Bollywood actress Diana Penty made a sparkling debut with a glittery gold ensemble at the 72nd Cannes Film Festival. For her look, the “Cocktail” actress chose a ravishing mini golden tassle dress by Greek fashion designer Celia Kritharioti. Diana, who is a part of the film gala as part of an association with vodka brand Grey Goose, paired the dress with embellished sheer golden knee-length heeled boots by the same designer. 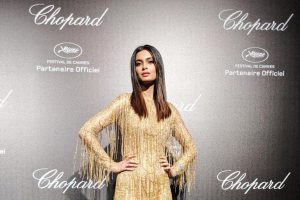 The 33-year-old actress attended the grand Chopard party with nude make-up and lips. She completed her look with sleek middle-parted hair. Apart from Diana and actress Kangana Ranaut, Huma Qureshi will be seen at the Cannes red carpet for the brand this year. (IANS)