The rumors have it that after a two-month-long engagement, Justin Bieber and Hailey Baldwin secretly got married last week at a New York City courthouse. Did they actually? Even though Justin Bieber, 24, and Hailey Baldwin, 21 got married in a courthouse on Thursday, their actual wedding is still to happen. The couple was spotted at the Marriage Bureau in a New York City courthouse, where they were apparently obtaining a marriage license. There were speculations that the couple met with a judge, which ignited further speculations that they had actually gotten married and that they might soon leave the country a source says. 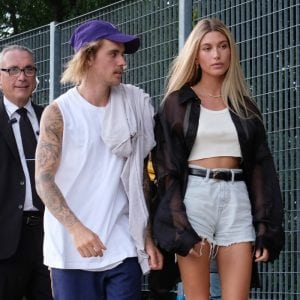 “They didn’t want anyone, but their families to know they got married. This wasn’t a wedding,” the source reveals, adding that the actual party with family and friends seems more important to the newlyweds than the legal action.

“They can’t wait to have a wedding,” a source says. “But for other reasons, it was easier for them to get the legal stuff out of the way now, and to get married. It was more of a necessary ceremony to make it legal. It doesn’t seem like it was a big deal to them.”

Justin Bieber's mom has some messages to share following her son’s marriage ceremony. A day after the couple secretly tied the knot on Thursday, Pattie Mallette, 43, tweeted, “Love is unconditional.” On another tweet, she wrote, “Haters gonna hate. #LoveWins.”

While fans are freaking out about the possible, rumored engagement of Bieber and Baldwin, Saleena Gomez isn't all that bothered about the news. Initially, she was shocked and a bit emotional, but she immediately revved up herself to move on. Currently, she is in New York, on a yacht with her friends. According to several social media fan accounts, Gomez appears to be more chill than she's ever been.