After the grand success of Gold movie Akshay Kumar has released the trailer of his upcoming film Kesari. The first look of the film was revealed by Akshay through his Twitter handle on 12 September 2018 This film is based on the Battle of Saragarhi. The battle was fought before the Tirah Campaign on 12 September 1897 between Sikh soldiers of the British Indian Army and Pashtun Orakzai tribesmen.

Needless to say that Akshay Kumar had a good run in 2018 so far with PadMan followed by Gold. The Akshay Kumar, Mouni Roy starrer is a hit with the public across the world. The movie Gold has again highlighted the fact that Akshay Kumar is undoubtedly one of the bankable stars in Bollywood. 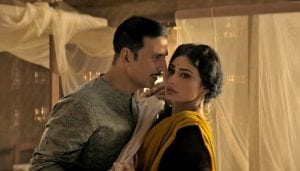 With the teaser of his first Tamil film 2.0 releasing on Thursday, things are certainly looking up for Bollywood’s Khiladi Kumar. But it looks like the good times will continue for Akshay in 2019 as well as he recently shared the first poster of his upcoming film Kesari.

Kesari is an upcoming period film based on the Battle of Saragarhi . In the film, it will be seen that 21 Sikhs fought against 10,000 Afghans in 1897. Akshay Kumar will be seen playing the role of Havildar Ishar Singh in the movie. The film features versatile actor Parineeti Chopra along with Akshay Kumar.

The film tells the story of Havildar Ishar Singh who participated in the Battle of Saragarhi while yearning for the respect of his estranged daughter. Kesari is helmed by Anurag Singh who is a renowned Punjabi director. Anurag Singh; prior to this has directed films like Jatt & Juliet, Punjab 1984 among others. But this is his first directional Hindi film. He has also co-written the film with Girish Kohli.

Principal photography of the film started in January 2018 and the film is scheduled for release on March 21, 2019.