Lisa Ray Becomes Mother to Twin Daughters at 46 Through Surrogacy 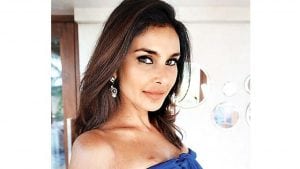 Speaking to the Bombay Times the actress said, “At this point of time, my life is full of cascading sentiments, attempting to coordinate feeding, napping and play schedules while juggling work, taking care of myself, travel and spending time with friends, family and my also my husband. My life has been full of fanatical adventures, but right now, I’m experiencing a new level of anarchy and love. I am getting impatient to bring our daughters to our home in Mumbai.”

She further added that so many things in her life have been spontaneous or unplanned. So, when the desire for children grew after she got married to her soulmate Jason Dehni, it honestly caught her by surprise.

As per reports, the twin daughters were born through surrogacy in Tbilisi, Georgia in June.

“I wanted to share our struggles and triumph. Having been open about my cancer journey and receiving so much unconditional support, sharing this moment of happiness feels right. Hopefully, our story can give hope to others who are struggling to have kids. Life throws you both challenges and miracles, and I’m unspeakably grateful for my miracle daughters,” she said.

When she was asked what plans does she have for her girls in the future? She replied that she will teach her girls to be resilient, strong, open and that they will be able to achieve anything they set their hearts on. There will be no boundaries, except the ones in our minds and children have no idea of what they can and cannot achieve. Bringing up the next generation to be kind is the greatest chance we have for a better future. I can’t resist whispering in their tiny ears — ‘The Future is Female’, Lisa said.

It may be mentioned that the actress was diagnosed with multiple myeloma on June 23, 2009. It is an uncommon disease; cancer of the white blood cells. They are known as plasma cells, responsible for producing antibodies.

Lisa announced that she was cancer-free, after a stem cell transplant in April 2010. The actress-model got married to longtime boyfriend Jason Dehni on October 20, 2012.

The Canadian-Indian actress made her Bollywood debut in 2001 with "Kasoor", but received critical acclamation for her performance in Deepa Mehta's film "Water".