Celebrity kids or star kids can always be seen within the limelight thanks to their parents legacy. Now, Bollywood has a number of lovely star kid who has a fan following of their own. As they are popular and fashionable among the fans for their cuteness. One amongst them is Shah Rukh Khan’s very little one AbRam Khan. Recently, AbRam was noticed at Aaradhya Bachchan’s seventh birthday bash where he was caught within the frame with Amitabh Bachchan. The photograph was thus lovely that Amitabh Bachchan took to social media and disclosed that AbRam thinks Amitabh Bachchan is Shah Rukh Khan’s father.

Yes! He revealed this along with the photo. However, what made things even more interesting was SRK’s comment on the photo and post. Shah Rukh Khan urged Amitabh Bachchan to come over and spend time with Little AbRam on Saturdays. He wrote, “Sir Aaya Karo na! Please stay at home with AbRam on Saturdays atleast.. He has some really amazing games on his iPad...u can doodle jump with him!” 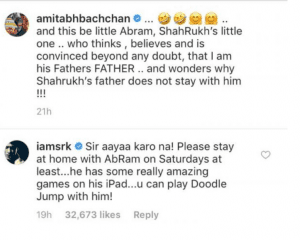 Doesn’t that sound amazing? On the work front, Shah Rukh Khan will be seen as Bauua Singh in Aanand L Rai’s Zero. The movie also stars Anushka Sharma and Katrina Kaif. The movie is about a man of short stature who has big dreams and how his life changes when he meets his dream superstar. The music in the movie is by Ajay-Atul and the trailer of Zero has already crossed 9 million marks on Youtube. The movie is slated for release on December 21, 2018.

Recently, Shah Rukh Khan has shared a lovely image of his 5-year-old son AbRam, who is seen wearing a statement T-shirt, that has “Mama Is My Queen” printed on that. He can also be seen sporting a cap and sunglasses and can be seen holding an iPad in his tiny hands. Shah Rukh Khan described the post in the most hilarious way possible and wrote: “For all the sons of the world… If your Mama is your Queen then there is no stopping you from being The Happy Prince (and an iPad loaded with games helps too).”