Urvashi Rautela Hits Back At Media That Claimed Boney Kapoor Touched Her Inappropriately, Asks It Not To Talk About Girl Power

Actor and model Urvashi Rautela recently slammed a report that claimed producer Boney Kapoor was seen touching her inappropriately at an event. The actor shared a screenshot of the video and commented on the news piece, “Presumably one of India’s ‘SUPREME’ newspaper and this is ‘NEWS’!!?? Please, don't talk about GIRL POWER or WOMEN’S LIBERATION when YOU don’t know how to RESPECT/HONOUR GIRLS.” 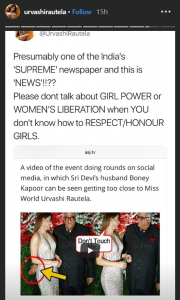 Urvashi Rautela and Boney Kapoor had met at Jayantilal Gada’s son Aksshay Gada’s wedding a couple of days ago and had posted along for the paparazzi. The report claimed Boney Kapoor seemed to be touching Urvashi inappropriately publically, who then asked him to keep his hands off her.

Urvashi has crowned Miss Diva in the year 2015 and depicted India at the Miss Universe pageant within the same year. After making her Bollywood debut with Sunny Deol’s Singh Saab The Great, she went on to feature during a few Hindi films as well as Sanam Re and Great Grand Masti. The actor is additional more popular for her special dance numbers like Daddy Mummy in Bhaag Johnny and Haseeno Ka Deewana in Kaabil. She was last seen as the female lead in the 2018 film, Hate Story 4.

Meanwhile, bone Kapoor continues to carry fort on the personal front after the death of spouse and superstar Sridevi last year. He has simply acquired the rights of 2018 film Badhaai Ho beneath his production house Bayview and plans to remake it in four languages as well as Tamil, Telugu, Malayalam, and Kannada. He's additionally making the remake of the film Pink in Tamil starring Ajith Kumar, Shraddha Srinath, and Vidya Balan.