Guwahati: All Assam Students’ Union (AASU) along with 30 other organizations staged massive protest ‘Khilonjiar Bajraninad’ against the most debated controversial Citizenship Amendment Bill, 2016 at Latasil playground today in Guwahati.

The agitated protesters were also seen chanting slogans against the bill and BJP led Government today.

Addressing the protest AASU advisor, Samujjal Bhattacharya termed the bill as communal and unconstitutional. He said, “At any cost, we are not going to accept this bill. With the Assam Movement, the Assam Accord was signed which clearly states that pre-1971, all Hindu and Muslims can stay in Assam with the rights of Citizenship. But, the entire illegal migrants who have entered Assam after 1971 will have to be deported. Assam and Northeast is not a dumping ground for illegal Bangladeshis.”

Also, Pramod Boro, the President of All Bodo Students’ Union (ABSU) addressing the mass gathering spoke on the dual issues of amendment of the Citizenship Bill as well as the granting of ST status to six indigenous communities of Assam.

Boro taunting Prime Minister Narendra Modi said, “Neither jati nor tribe is safe in Assam. The government sitting in Delhi has proven that they have not accepted us not accepted us as their own.” 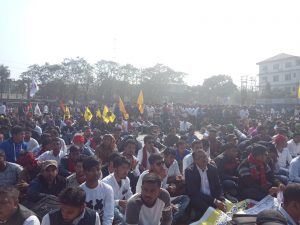 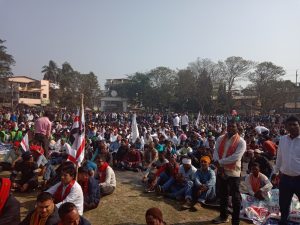 It may be mentioned that many senior journalists including celebrities from the Assamese film industry along with students’ leaders from several parts of the state from Sadiya to Dhubri had joined in the protest today.