Guwahati: Asom Gana Parishad (AGP) on Thursday staged a 10-hour hunger strike to protest against the contentious bill and Government’s stand on the bill.

Addressing the gathering, AGP working President, Keshab Mahanta said, “AGP has been fighting for the sake of the people since its days of inception. Citizenship Amendment Bill, 2016 will be tabled in the Rajya Sabha on January 31, thus, we will do the needful so that the BJP-led Government shouldn’t dare to get it to pass in the Parliament session which is going to start from January 30.” 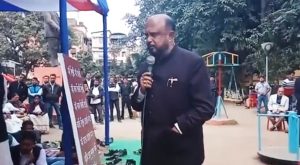 On the other hand, former Chief Minister of Assam, Prafulla Kumar Mahanta questioned the Chief Minister Sarbananda Sonowal led BJP Government that if the leaders of the state from Meghalaya, Nagaland, Tripura and West Bengal can oppose this contentious bill then why not the Assam Minister feel to do the same.

Mahanta further highlighted the fact that AGP party was formed after six years of Assam Movement; thus, the party has been always been concerned about the state and its people.

“Our leaders took a bold decision to come out from the cabinet by breaking the alliance for the greater interest of the people of the state and community,” said Mahanta.

Also, attending the programme at Dighulipukhuri today, singing sensation and Assam’s heartthrob Zubeen Garg stated that his support against the controversial Citizenship Amendment Bill, 2016 is on and he will keep supporting the people and the organizations whoever had come out to protest against the bill. 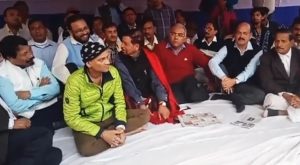 “Our protest will go on; we will have to march towards the rural and semi-rural areas to raise awareness among the people about the bill and its impact. Asom Gana Parishad (AGP) is a regional party, many good things can be done under this party. Every one of us has got some responsibility for the public say it AGP or AASU or me. Our Ministers should try to understand the feelings of the people; actually, we need such kind protests where people can come out against the bill. In fact, I believe this bill will get scrapped; we are hopeful that we would not allow the bill to get passed in the Parliament. If not, then the protest will be much stronger in the future,” said Zubeen Garg.

Zubeen also appealed the people of Assam to live the life like a tiger not like a fox. “A tiger has got its own territory, so be a tiger, it’s high time to be a tiger now,” urged Zubeen Garg.