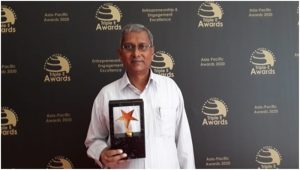 The Vice-Chancellor, Fr (Dr) Stephen Mavely, saw in the award “a validation of the University’s engagement in ‘Service Learning’ – a unique feature of Don Bosco University that integrates academic inputs, relevant community-centered activities followed and preceded by structured reflection in an intertwined partnership. It combines a learning process that results in academic, civic and personal development while, at the same time, tackling the challenges affecting the wider society”.