Guwahati: With the end of the 12th edition of the National Film Development Corporation (NFDC) Film Bazaar at the 49th International Film Festival of India (IFFI), several rising filmmakers from India were being awarded for their upcoming projects at the event held at Panaji in Goa last week.

The film ‘Aamis’ revolves around the relationship between a married woman in her late 30s and a young college student.

The Facebook Award offers advertising credits worth €8826.63 to the winning film, which can be used in the promotion of the official Facebook page of that film.

The award was given based on the most viewed film (by duration) in the viewing room. Moreover, recipients were selected by a jury comprising internationally acclaimed festival programmers, directors including producers and other industry executives.

Speaking to The Sentinel Digital, Director, Bhaskar Hazarika said, "NFDC Film Bazaar is one of Asia’s biggest film markets and is held in Goa every year. It is a place where new films are first previewed by festival programmers, buyers, and distributors from around the world. 'Aamis' was one of 24 films “Recommended” to its delegates by Film Bazaar. At the end of the market, 'Aamis' received an award sponsored by Facebook for being the project that created the maximum buzz among delegates. The award includes €8826.63 of Facebook ads that can be used to promote the film."

Hazarika also mentioned that they are now looking for a prestigious platform for the world premiere of the film. "Hopefully news on that will be out soon. In Assam, we shall go for a theatrical release by July 2019," he adds.

Also, talking about the movie, 'Aamis', Hazarika further added, "The film is a love story that begins in brightness but ends in darkness. It has been produced by Poonam Deol and Shyam Bora and features two new sparkling acting talents - Lima Das and Arghadeep Barua - supported by Neetali Das, Sagar Saurabh and Manash Das."

Apart from Hazarika’s ‘Aamis’ Prateek Vats’s ‘Eeb Allay Ooo!’ also won The Facebook Award in the Work in Progress section. As per a report, this movie revolves around a migrant man in the capital New Delhi who is hired to capture stray monkeys in the city's high-security zone which is home to politicians and senior bureaucrats.

It may also be mentioned that Bhaskar Hazarika's debut film ‘Kothanodi’ (the river of fables) had its world premiere at Busan, where it received a post-production grant from the Asian Cinema Fund. It also won the Rajat Kamal Award (National) for the best feature film in Assamese in the year 2015.

Some Stills from the Movie 'Aamis' 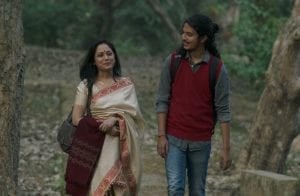