Guwahati: A Bharatiya Janata Party worker had allegedly uploaded an abusive/ derogatory content in Facebook with malicious attention to malign the image of UPA chairperson Sonia Gandhi on Monday.

The alleged BJP worker identified as Bitupon Phukon son of Rushinath Phukon is a resident of Bekadolong under Sonari police station of Charaideo District. 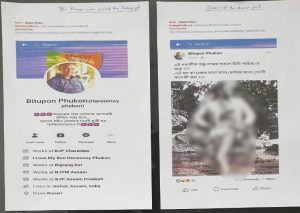 A complaint was lodged by the Assam Pradesh Congress Committee at Bhangagarh Police Station alleging the BJP worker from Charaideo had uploaded an image of Swiss Film Actress Ursula Andress in a bikini set as Sonia Gandhi on his Facebook account. 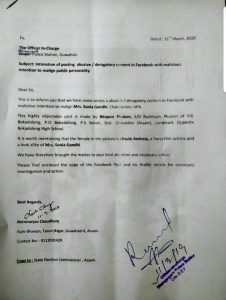 The matter was brought under the attention of Bhangagarh Police today by Netraranjan Choudhury on behalf of Assam Pradesh Congress Committee (APCC).

A copy of the complaint was also sent to The Election Commissioner of Assam.

It is worth mentioning that Swiss-based Actress, Television Star and Former Model Ursula Andress had appeared in several American, British and Italian films. She was best known for her breakthrough role as Bond girl Honey Ryder in the first James Bond Film.