Guwahati: Eminent vocalist and nightingale of Assam Dipali Borthakur’s last rites were performed at the Nabagraha Cremation ground in Silpukhuri here on Saturday.

The final rites of the vocalist were performed with state honours.

She passed away at the age of 77 at Guwahati’s Nemcare Hospital on Friday after a prolonged illness.

Vocalist Dipali Barthakur was suffering from a motor neuron disease for the past four decades and was admitted to Nemcare Hospital recently with age-related ailments.

Prime Minister Narendra Modi in his twitter earlier sent his condolences to the family members of the deceased singer Dipali Barthakur, Prime Minister, Modi in his tweet said, "With the passing away of Dipali Barthakur Ji, we have lost an outstanding singer who made Assamese music and culture even more popular across India and the world. Her melodious songs will continue to enthrall generations to come. Condolences to her family and countless admirers." 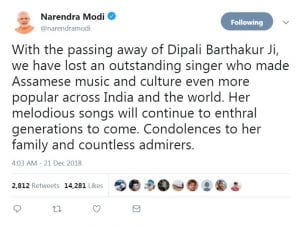 Also, Chief Minister of Assam, Sarbananda Sonowal in his tweet said, "Deeply saddened by the demise of noted singer Dipali Barthakur. Her enormous contributions enriched Assamese culture. My heartfelt condolences to her bereaved family and well-wishers."

Bollywood singer from Assam, Angaraag Papon Mahanta at Nabagraha Crematorium told the media, "Its very unfortunate that we have lost one of the most eminent vocalists of Assam. It has been years, that I didn't hear her voice. I am really fortunate because my first album 'Jonaki Raati' was released by her. I address her as my own 'Jethai' (auntie). I was on the way to Siliguri for a function when I heard about her demise and decided to stay back. She is truly a nightingale of the state."

Earlier on Friday, Assam Pradesh Congress Committee, President, Ripun Borah also stated that vocalist Dipali Barthakur was an evergreen personality. "With her demise, it is an end of an era. She was one of the most versatile singers of Assam. Each and every song is sung by her has the smell of the land, thus, her songs are evergreen," said Ripun Borah in a press statement.

AASU advisor, Samujjal Bhattacharya said, "I have no words left to express my feelings today, she will remain with us forever. She had a golden voice. She always depicted her connections with the land through her songs and also enlightened us. This is a great loss to the state, she is truly the 'Lata Mangeshkar' of Assam."

The ‘Padma Shri ‘ awardee sung mainly in the Assamese language. As per earlier records, vocalist Barthakur received the fourth-highest civilian award of India in the year 1998.

The Nightingale of Assam, Dipali Barthakur was born to Bishwanath Borthakur and Chandrakanti Devi in Sonari at Sivasagar district (present Charaideo District) of Assam.

In her Musical career, she started her career as a singer when she was studying in class nine in the year 1958.

She sang the song “Mor Bopai Lahori” on All India Radio, Guwahati and the song “Joubone Amoni Kore Chenaidhon” for the film Lachit Borphukan (1959).

A biography of Nightingale Dipali Barthakur also claims that she sang her last song “Luito Nejabi Boi” in the year 1969.

Further, the singer also had to go through some tough period as she began to suffer from a severe Motor neuron disease which hindered her singing and forced her to get around with a wheelchair.

In her earlier life, she got married to Neel Pawan Barua, an eminent Indian artist and painter from Assam and son of renowned Assamese writer Binanda Chandra Barua in the year 1976.

Apart from the fourth highest civilian award, the singer also received Silipi Bota in the year 2010 from Government of Assam and Aideu Handique Silpi Award in the year 2012 by the Sadou Asom Lekhika Somaroh Samiti.