As per reports, Six airports in India will soon see a spike in business activities as the government has given its nod to modernize them under the PPP (public-private partnership) model. The Union Cabinet, which was chaired by Prime Minister Narendra Modi approved a proposal to manage Ahmedabad, Jaipur, Lucknow, Mengaluru, Thiruvananthapuram, and Guwahati airports under the PPP model.

Gogoi also mentioned that handing over to profit-making LGBI airport which is contributing to economic growth and prosperity of the nation is total injustice and will go against the interest of the people of NE region. 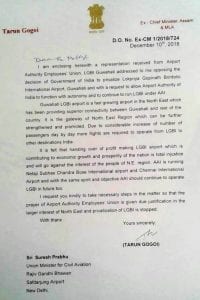 He also compared LGBI airport with Netaji Subhas Chandra Bose International airport and Chennai International Airport and suggested that with the same spirit and objective AAI should continue to operate with LGBI in future.

He also showcased the prayer of Airport Authority Employees Union and urged that they have been opposing the move to privatize the airport since 2013 when Government was under UPA-led Government. Reportedly, the proposal to privatize airport was first pushed by them.