Gauravv Somani, a spokesperson of the State Congress, has been appointed as the State President of AIPC Assam with Rijumoni Talukdar as Vice President and Tinat Masood as Secretary respectively. 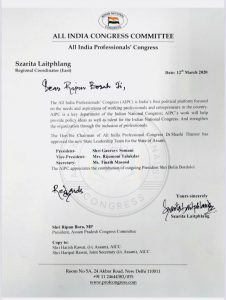 The names of these officials were announced by Szarita Lafalang, chairperson of the East Zone of AIPC. 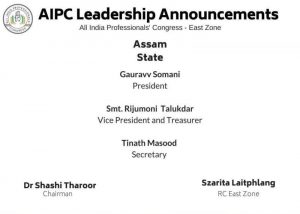 It should be noted that the motive of AIPC is to provide a platform for the people of various professions and businesses across the country to overcome their problems and to advance them in their respective fields. It is to be mentioned that Somani is the spokesperson of the Assam Pradesh Congress Committee and the Vice President of the Hindi-speaking Development Council, under the Government of Assam.

Newly-appointed state president of AIPC, Gaurav Somani, in a special conversation with the media said that the political system also requires experience with the expertise of professionals working in various fields. Political systems cannot be carried forward in the traditional way. We need to gain the confidence of the people back. AIPC will engage with professionals and give them a strong platform for positive political changes. Somani thanked AIPC National President Shashi Tharoor, All India Congress General Secretary Harish Rawat, State Congress President Ripun Bora, MP Gaurav Gogoi, Zarita Laphlang and state Congress leadership for being entrusted with this huge responsibility before the 2021 assembly elections.