Uber rider said that when she reached the airport from her home in the Rehabari area, she received over Rs.1800 bill from Uber for the, not so joyous, ride.

GUWAHATI: Amid the continuous spell of showers since morning, one of many unlucky passengers had an expensive insult that added to the massive traffic snarl towards the Lokpriya Gopinath Bordoloi International Airport.

One of the citizens, on Friday, said that when she got to the airport from her home in the Rehabari area of the city, she received a bill of Rs. 1800 from Uber.

The lady, Stuti Choudhury landed at Lokpriya Gopinath Bordoloi International Airport in Guwahati city as she had to fly down to Delhi for her work.

She requested an Uber ride to take her to the airport, however, once they got on the highway, Stuti realized that traffic was at a standstill following the rain and did expect fares may go up but didn't think a bit of such an abnormal fare to flash on her screen, once she lands at the airport.

Upon reaching the airport, the fellow rider was taken aback (indeed an OOUCH moment) to react after seeing a bill of Rs. 1851 flashing out on her phone.

"I had my flight to Delhi at 12.40 pm and I usually take an uber whenever I have to travel..it was raining and I expected a higher fare because uber never misses a chance to loot ...and today it was showing 1851 for just a dropping at the airport..obviously I had no other option for other than to wait for the rain to stop, I'd have missed the flight...In fact, asked why it was so much today and the driver said "aji petrol pump bondho baideo, gari nai, xhaikarone besi", the rider added.

Reacting to the riders' sentiments the diver said, "What can we do due to closure of petrol pumps and non-availability of cabs, Uber is charging so much."

Meanwhile, the story of Uber doesn't stop here. Currently, if a rider wants to book a cab to the Guwahati Airport from 6 miles of the city here are the details. 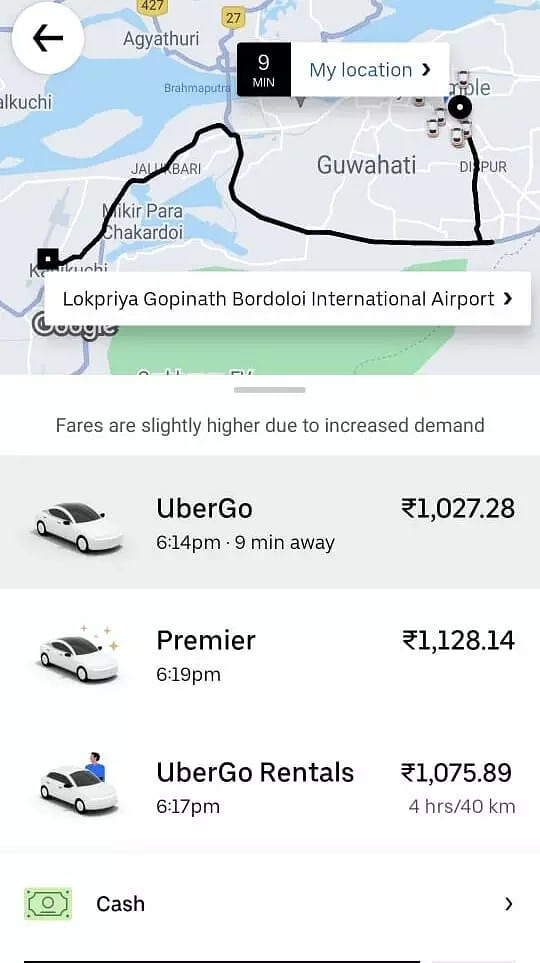 Notably, the North East India Petroleum Dealers' Association (Greater Guwahati Unit) has announced a 24-hour closure of petrol pumps in the Greater Guwahati area from 5 am on Friday till 5 am on Saturday, May 14.

The association further threatened to launch an indefinite strike from 5 am on May 16 if the oil companies fail to meet its demand for redressal of the problem of arbitrary cancellation of load delivery and short delivery of fuel by transporters.

Earlier, the government has come down heavily on cab aggregators like Uber and Ola amid increasing consumer complaints about "unfair trade practices" such as surge pricing, ride cancellation, drivers refusing to turn on the air conditioner, and more.

Reportedly, the consumer affairs ministry held a meeting with companies such as Uber, Ola, Rapido, Meru Cabs, and Jugnoo and warned the companies of strict action.

The main issues under discussion included surge pricing, frequent cancellation of rides by drivers over trivial issues such as the destination and payment mode, refusal to turn on air conditioners in cabs, different pricing for different users, and more.

"We told them (cab aggregators) about the rising consumer complaints against their platforms. We gave them the statistics also. We have asked them to improve their system and redress the consumer complaints otherwise the competent authority will take strict action," Rohit Kumar Singh, consumer affairs secretary said after the meeting.