The students and teachers of the college undertook many clean drive programmes in the college by cleaning the classrooms and the campus.

The NSS unit has also observed Swachhta Pakhwara programmme by undertaking various activities. On August 13, the NSS volunteers, students and teachers organized a clean drive programme on the college campus. 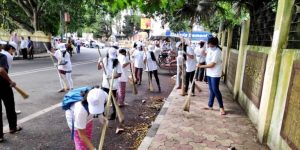 They cleaned the busts of the founders of the college and statue of Bharat Ratna Dr. Bhupen Hazarika in the Dighalipukhuri Park.

Handique Girls College is a constituent college of the University of Guwahati. It is one of the oldest colleges located in the Indian state of Assam and offers undergraduate courses in Arts and Science.

Mrs. Rajabala Das was the founder principal of the college. The college was initially located in the Panbazar area of the city. With the shifting to the present site in 1940, the college was renamed Handique Girls College (in honour of noted philanthropist RK Handique), and became affiliated to the University of Calcutta. The colleges later become affiliated to the University of Guwahati following its establishment in 1948.

The college is situated on the western bank of the Dighalipukhuri in Guwahati. The present campus is spread over two acre of land. The Government of Assam has allocated an additional four-acre of land for future expansion.

The college has eighteen departments offering major and general courses. The college offers courses of study in both Arts and Science faculties up to Degree Major level. The medium of instruction is English. However, Assamese is also used as complementary to English. Conforming to the national pattern of education, 10+2+3 structure is followed in the state of Assam and the Three Year Degree Course (TDC) has been introduced from the 1984-85 session. 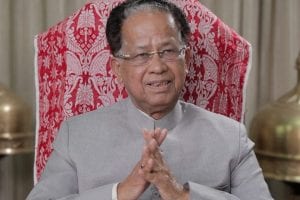 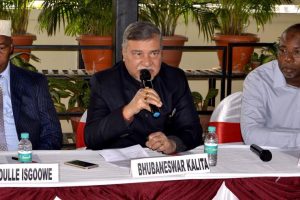