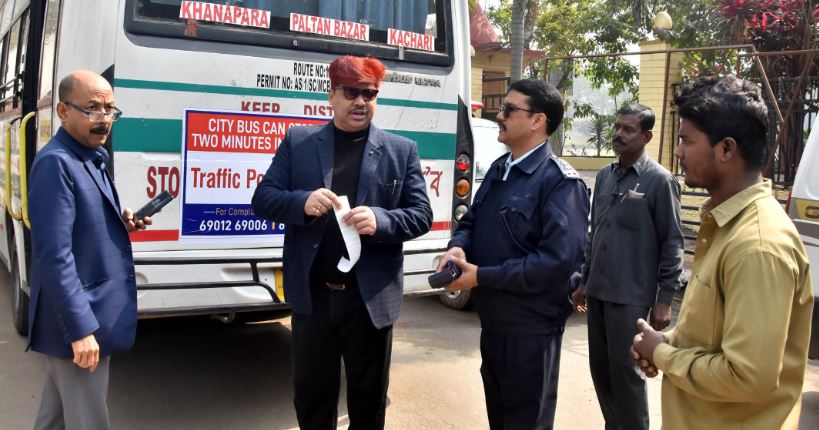 GUWAHATI: To make Guwahati transport hassle-free for the travellers, a group of senior officials of the Transport Department conducted a drive in the city on Thursday and found irregularities like conductors taking city bus fares without issuing tickets and general passengers occupying seats meant for senior citizens and persons with disabilities.

A team led by Dr KK Dwivedi, Commissioner and Secretary, Transport Department along with Commissioner, Adil Khan and other department officials took a city bus ride in order to get a first-hand experience of the problems being faced by daily commuters. The officials boarded the bus without disclosing their identities. The basic objective of the bus ride was to check whether the rules of the Motor Vehicle Act were followed and to understand the inconvenience being faced by passengers.

The officials noticed that city buses were flouting rules by plying on routes without permit thereby causing serious traffic congestion in the city’s arterial routes. They witnessed that a bus conductor was taking the fare without issuing tickets to the passengers. Moreover, seats reserved for senior citizens and specially-abled were occupied by other passengers. They also found that doors were not closed while the bus was on motion, halted beyond the limit of two minutes at the bus stops and the rule of rear door for entry and front door for exit was violated against the safety standards.  Dr Dwivedi took a serious note of it and instructed the department officials to deploy teams to check city buses breaching the Motor Vehicle Act in Guwahati city. “Twenty enforcement teams of Transport Department were deployed at different locations of the city. During the drive, 40 vehicles were seized and on-the-spot fine of approximately Rs. 32,000 was imposed for route violations, not issuing tickets to passengers and keeping the doors open while plying,” said Commissioner Adil Khan.

Meanwhile, driving licence and permit of the bus on which the officials travelled were cancelled. “Such sudden enforcement drives by Transport Department will continue in the future and stringent action will be taken for violations of rules,” Dr Dwivedi said.