Guwahati: Keeping in view of the smooth and happy celebration of December 31, Deputy Commissioner of Kamrup (M), Virendra Mittal for Excise Branch in an order issued strict instructions today.

In the order, Kamrup (M) stated that four teams of excise personnel headed by responsible officers will conduct patrolling and inspection of licensed premises. Secondly, consumption of liquor in public places is strictly prohibited, thus, violation of the order will lead to a penalty of Rs 5000 as per excise rules.

Also, licenses of Indian Made Foreign Liquor (IMFL) shops will have to adhere to rules and regulations under excise acts and rules.

Temporary bar license should have to be obtained from Competent Authority by desirous organizers.

It may also be mentioned that the organizers and licensees will have to arrange sufficient light in the licensed premises and also keep CCTV cameras functioning. 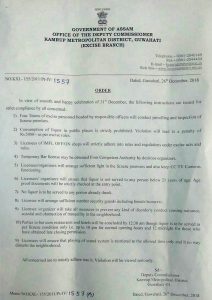 Licensees or organisers will have to ensure that liquor is not served to any person below 21 years of age. Also, they will have to verify the age proof documents of the consumers at the entry points of the bar.

The order also mentioned that no liquor should be served to any persons who are already drunk.

Organisers must have an arrangement of a sufficient number of security guards including female bouncers.

They will have to take all measures to prevent any kind of disorderly conduct causing nuisance, scandal and obstruction of tranquillity in the neighbourhood. Furthermore, they must ensure that playing of the sound system is restricted to the allowed time and should not disturb the neighbourhood.

*NOTE: Liquor is to be served as per license condition which is up to 10 pm for normal opening hours, but for organisers who had obtained late closing permission can continue up to 12 midnight.