Guwahati: Despite knowing the fact that the decision of joining outlawed faction ULFA-I by the nephew of Commander-in-Chief, Paresh Baruah, Munna Saikia was wrong, his sister (name withheld) came out in support of his brother on Facebook on November 18.

The girl (name withheld), younger sister of Munna Baruah (24) in her Facebook posts, said, “Although you left us to join the militant organisation ULFA-I for the sake of the community and people of Assam...I respect your bold and courageous decision to join the militant outfit....I am really proud of you brother....my brother...I never thought that you would live everything to join the organisation living us all alone....But, I realise that you love your land and the community more then anything........Maybe the path you have chosen is wrong, but we respect and salute your decision and wish you all the luck.” 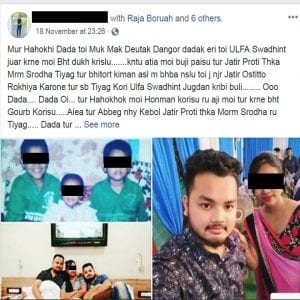 The 24-year-old Munna Baruah, nephew of the outfit’s commander-in-chief (C-in-C) Paresh Baruah and a trainee at the Digboi IOCL and was reported to be missing since last Thursday, his joining the outfit came after being confirmed by the Assam police and the C-in-C over a purported telephonic conversation with pro-talks ULFA leader Prabal Neog.

It may also be mentioned that the heartbroken mother of Munna Baruah was admitted to a hospital within hours of news of her son joining the proscribed United Liberation Front of Assam-Independent (ULFA-I). She is sick and undergoing treatment at Life Line Hospital in Tinsukia.