Music of Struggle: A Day into Lives of Guwahati Fishermen

Guwahati: It might matter nothing to many, but have we ever realized the efforts and the struggle that the fishermen community pulls up in order to reach that taste-bud tickling piece of fish to your platter.

Dropping a worm in the stream tied to bait and taking a fish out is not a trick of magic, it is life for some. Some men put their lives on a stake and sail across the dangerous waves of giant rivers to make sure that the scrumptious piece of your favourite fish reaches your platter of rice.

Yes! they are the fishermen who sail across the rivers measuring fierce distances on boats to catch as many fish as they can with their nets. 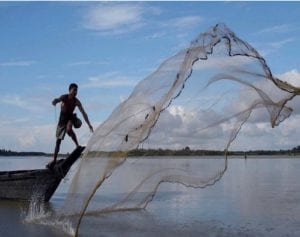 Be it a scorching sunny day of June or a misty cold December morning, the fishermen and their boats are always on the run to and fro the Uzanbazaar ghat, one of the busiest wholesale fish markets which caters to the city’s growing demand for fish ensuring its abundance in the local markets as well as the market areas in the adjoining places of Guwahati where fish dealers clutter around the ghat waiting impatiently for the boats laden with big and small fishes to arrive.

“I have always been seeing this since childhood. There are around twenty to twenty-five fishermen families settled over here. They set off with their boats and nets in the dark of the nights, and return with a boatful of fish by the onset of the morning. The fish is then sold to the wholesale dealers,” affirms Ramasish Choudhury, a local resident and a shopkeeper near the ghat. 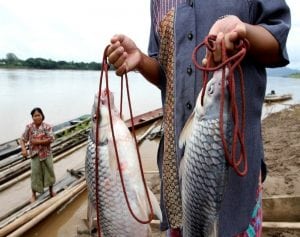 The incredibly unique way of living of the fishermen, their courageous approach towards life and arduous efforts put in to catch best fish are indeed worth a keen and close observation. For many venturing into the deepest of the rivers and to have a swirling shoal of fish trapped in the net might look like a matter of sheer joy and adventure. But for the fishermen, who fill their stomach doing this every day, it is a little more than that- it’s a matter of rare luck and back-breaking labour, a job that earns them in pennies.

Apart from these, there are also enormous risks involved in their job. Amongst which, the high and low tides, sudden change of the weather and accidents are quite common. Moreover, there is no navigation system or safety equipment installed in their simple and inexpensive boats made out of bamboo and wood, which leads to frequent cases of accidents in the river.

Bikash Sutradhar, a local fisherman shares one of such incidents which he confronted around two years ago, “like any other night, it was a fair July night with a star-studded sky, I could even imagine something was about to happen. I and my fellow fishermen reached the middle of Brahmaputra River, when it started to drizzle, which I thought would stop for a while. But it didn’t, and in a while, it began to rain hard. The wind was strong and my boat turned upside down, my fellow men luckily were there for my rescue. If they would not have been there, I would have died.”

“My wife doesn’t like it when I go for fishing at night, because the incident had made her a weak person. And I’m just not allowed to go alone as its strictly ‘no-no’ from my family. I just wonder why I am still passionate about fishing,” laughs aloud Bikash.

Apparently, these fishermen have begun to accept the risk that comes with the fishing occupation. For some like Bikash, it has become a part of life and for some others its helplessness.

Ananth Das, a fisherman residing near the Uzanbazaar Ghat says, “Life is difficult for us. We toil throughout the day and at the end of it, the major part of the profit made is taken away by the fish dealers and the middlemen. When hours of arduous efforts and risks earn you something around Rs 400 a day, nothing seems adventurous.”

Once they are back in the morning, the boats are hauled to shore by the fishermen. They now venture out in groups of four, sharing the burden, cost, profits and losses alike.

There are days when they are blessed with plenty, but on other days they return empty-handed, with a loss of about Rs 700 that they spend on diesel to fuel the motors and other necessary things.

Like Ananth Das, Raju and Kanha are also fishermen who own boats. They have been doing this for three generations. Like some others, they own more than one boat. Raju has three boats in his possession and Kanha has two. Sometimes, the boats are also given to fellow fishermen on a lease if they don’t own one. 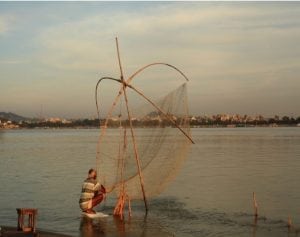 Sitaram Choudhury, a local sub-dealer in the fish market says, “the demand for fish in the city is increasing at a never before rate and that mounts tremendous pressure on the fishermen. They have to move out in the dark of the night so that the markets remain flooded with the fish in the mornings. They also try their luck in the afternoons, but it is only during and after the midnight that the catch is satisfactory for the fishermen.”

Besides their rugged living conditions, these people manage to revel. And what is most worth noticing about them is their music called Bhatiyali which incessantly flows through their highs and lows.

The sound of splashing water hitting the oars of the boats inspired this genre of a traditional form of folk music amongst the fishermen community in Bengal, and Assam. The word Bhatiyali comes from the term bhata meaning ebb or downstream. These river songs sung by the boatmen have inspired generations and are still managing to be some of the most melodious folk songs inside the larger periphery of music.

According to Sukumar Dutta, a noted young Assamese musician, “river songs depict the life of a fisherman and the communities that live along the rivers and their struggles.”

“Bhatiyali to me is loner’s song as it depicts everyday life or Jibonmukhi music where the solitary life in the river is sung aloud. It is a distinctive form of music within the folk genre. I am a keen traveller, I travel a lot. I stay by nature and study it deeply and feel it. Every form of music has a distinct temperament, mood and pace. My music has many things that I personally come across, like nature, life or other things,” further shares Sukumar.

On the other hand, Nilanjana Sarkar, winner of the 2010 National award for best female playback singer says, “River is peaceful and calm, it is the perfect example of equilibrium between the gentle and the fury with enormous energy in store. Music is like a river: ever flowing. And this is why I never confine myself to a particular genre of music. As a singer, I feel that in music, implementation of new techniques should always be there.”

However, it is not only in music that the challenging life of a fisherman has elaborate references in; starting from Rabindranath Tagore’s poetry to present day documentaries, the unique life of fishermen has been finding a significant place since ages.

So next time before digging into the delicious fish, give a thought on the efforts of the fishermen.