The event was marked by splendid parade by the Air Warrior, display of Rifle drill and Air show by the famous “Sarang Team”.

The President Standard and Colours are the highest and the most prestigious honour bestowed upon units of the Armed Forces in recognition of their valuable contribution to the security of our nation, both during hostilities and peace.

Addressing the units, The President of India, Ram Nath Kovind said, “It is always a pleasure to visit Assam and North east. I am particularly happy to be here today at AFS in Guwahati to award Standards to 118 Helicopter unit and Colours to Air Defense College.” 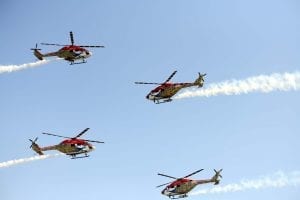 He added, “Both these units have distinguished themselves with stellar service to the nation. They have a rich history of professional excellence and have discharged their responsibilities with distinction. The nation honours them today for their selfless devotion, professionalism and courage in the face of adversity.” 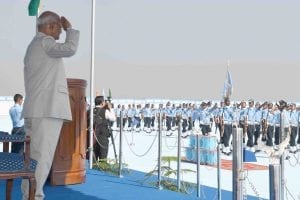 He also stated that the Air Force Station (AFS) Guwahati and the Air Defense College here have a rich history of professional excellence and have discharged their responsibilities with distinction.

It may be mentioned that 118 Helicopter Unit, the “Challenger” was raised at Chabua on November 22, 1971 with Mi-8 Helicopters.

The unit is presently commanded by Wing Commander AS Rajput who received the Standard from the President today.

It was raised as Control and Reporting School in 1958. From a small beginning, conducting two courses, the institution has grown to be a centre of Excellence in Air Defence Training. The college also provides training to sister Organisation and also to friendly foreign countries.

118 Helicopter Unit and Air Defence College have been nominated for award of President’s Standard and Colour respectively for their sustained dedication, professionalism and their contribution to security of the nation both during war and peace.

After the end of the parade, Chief of Air Staff, Air Chief Marshal BS Dhanoa PVSM AVSM YSM VM ADC, had interaction with the Media.

The other dignitaries included The Governor of Assam, Chief Minister, Air Chief Marshal and other high ranking Civil and Military personalities.